Depression is a human illness that may prevent sustainable goal attainment. People with Type 2 diabetes mellitus have a much higher risk of being depressed than the nonclinical population, which may be due to associations between the neurobiological mechanisms that play a role in the two diseases. The objective of the present study was to investigate the effects of rational emotive cognitive behavioral coaching (RE-CBC) on depressive thinking in a group of inpatients with Type 2 diabetes in Nigeria. A pretest–posttest control group design was used. Eighty participants were randomly allocated to the treatment and control groups. Outcomes were evaluated using Nigerian language (Igbo) versions of the Beck Depression Inventory-II and the Hamilton Rating Scale for Depression, and the intervention was delivered in Igbo. An Igbo version of the Rational Emotive Behavior Therapy Manual for Depression was used as the intervention package. Data were analyzed using mean rank, repeated measures ANOVA, and the Mann–Whitney U test. At the end of the intervention, a significant decline in depression was observed among the participants in the group that received RE-CBC, but not in those that received standard counseling (control group). The effects of RE-CBC were maintained at follow-up. The present results suggest that RE-CBC is an effective and time-efficient intervention for managing depression in inpatients living with Type 2 diabetes. Further evaluations are warranted in other countries. 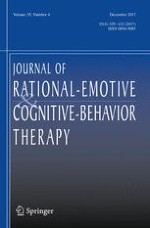 The Interface Between Sartre’s Theory of Emotions and Depersonalization/Derealization

Schemas Mediate the Link Between Procrastination and Depression: Results from the United States and Pakistan