Multidimensional Treatment Foster Care for Preschoolers (MTFC-P) has thus far only been tested for diminishing behavior problems in the US. This study tested relative efficacy of MTFC-P on multiple outcomes against treatment as usual in the Netherlands (TAU; Study I), and regular foster care (Study II). The sample included 55 children that received MTFC-P, 23 children received TAU and 30 children from regular foster care (RFC). Changes in behavioral and relationship functioning, trauma symptoms, hypothalamic-adrenal-pituitary (HPA-) axis functioning, and caregiving stress were assessed via questionnaires, interviews, and salivary cortisol. Outcomes of Study I were evaluated using a randomized controlled design and quasi-experimental design, outcomes of Study II according to non-equivalent group comparison. No evidence was found for relative efficacy of MTFC-P over TAU. A treatment effect was found on trauma symptoms, in favor of TAU. Outcomes of Study II revealed that whereas caregiving stress and secure base distortions were significantly more severe at baseline in MTFC-P compared to RFC, post treatment differences were no longer significant. However, percentages of symptoms of disinhibited attachment and attachment disorder were nearly equal between groups at baseline, while post treatment percentages indicated significantly more symptoms in MTFC. In addition, results revealed a significant difference in the severity of externalizing problems post treatment, in favor of RFC. The results obtained within this study indicate that children in MTFC-P and usual treatment foster care in the Dutch context improved similarly, thus not showing the same advantages that MTFC-P has demonstrated in the US. Results should be interpreted with caution due to lower than planned power. Findings underscore the challenges of testing novel treatments across contexts with highly different child welfare provisions. 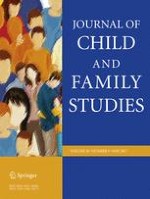 Anxiety and Stress in Children Following an Earthquake: Clinically Beneficial Effects of Treatment with Micronutrients