The objective of this study was to investigate the effects of integrated yoga on the quality of life and interpersonal relationships in normal pregnant women.

One hundred and two pregnant women between 18 and 20 weeks of gestation who met the inclusion criteria were recruited from the obstetric units in Bangalore and were randomly assigned to two groups of yoga (n = 51) and control (n = 51). Women with medical conditions that could potentially lead to pregnancy complications and those with abnormal fetal parameters were excluded. The yoga group received integrated yoga while control group received standard antenatal exercises, both for 1-h three times a week from 20th to 36th week of gestation. Pre and post assessments were done using WHOQOL-100 and FIRO-B questionnaires. 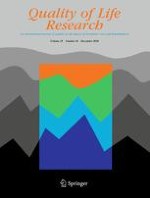 Valuing health in a racially and ethnically diverse community sample: an analysis using the valuation metrics of money and time

Optimists doing something different: a patient’s view of geneQOL research

Which patient will feel down, which will be happy? The need to study the genetic disposition of emotional states