Attachment-based compassion therapy (ABCT) is a new protocol of compassion based on attachment theory. The aim of this study was to assess the efficacy of this protocol for improving self-compassion in a healthy population and determine whether improvements in self-compassion mediate changes towards a more secure attachment style. The study consisted of a non-randomized controlled trial with an intervention group (ABCT) and a waiting list control group. In addition to pre- and post-intervention assessments, a 6-month follow-up assessment was included. Participants were healthy adults attending ABCT courses who self-rated as not having any psychological disorders and self-reported as not receiving any form of psychiatric treatment. Compared to the control condition, ABCT was significantly more effective for improving self-compassion as evidenced by changes on all subscales on the Self-Compassion Scale (SCS), except isolation. Effect sizes were in the moderate to large range and correlated with the number of sessions received. ABCT also led to improvements across all subscales of the Five Facets of Mindfulness Questionnaire (FFMQ), except describing. ABCT decreased psychological disturbance assessed using the General Health Questionnaire (GHQ-28) and decreased experiential avoidance assessed using the Acceptance and Action Questionnaire (AAQ-II). Furthermore, ABCT led to significant reductions in levels of anxiety and avoidance. Secure attachment style significantly increased in the ABCT group and was mediated by changes in self-compassion. In summary, ABCT may be an effective intervention for improving self-compassion and attachment style in healthy adults in the general populations. 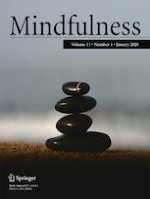 How Mindfulness Enhances Meaning in Life: A Meta-Analysis of Correlational Studies and Randomized Controlled Trials

You Want to Make Something of It?

How the Mindfulness Manifold Relates to the Five Moral Foundations, Prejudice, and Awareness of Privilege