Prior studies suggest that a combination of physical activity and mind–body exercises, often seen in martial arts, may attenuate negative behaviors in youth with Autism Spectrum Disorder (ASD). Therefore, the aim of this study was to examine the effects of an 8-week judo program on behavioral factors in children with ASD, using a mixed-methods approach. A total of 25 children (ages 8–17), diagnosed with ASD, participated in an 8-week judo program (1 × week). Parents of participants were given the Aberrant Behavior Checklist (ABC) to compare the severity of ASD-related behavior at baseline and at the end of the program. A subset of parents (n = 9) participated in semi-structured interviews that focused on their child’s behaviors during the judo program. Non-parametric paired t-tests were conducted to compare differences in the ABC scores from at baseline and at the end of the program. Interviews were coded independently by two trained researchers and categorized into behavioral themes. Participants attended an average of 7.04 ± 1.06 classes (out of 8 sessions). There were no significant changes in ABC scores, however, parent interviews revealed that 78% of parents observed improvements in both social skills and self-esteem as a result of the judo program. Despite no significant differences in ABC scores pre and post-judo, data from parent interviews indicate improvements in self-esteem and social skills. Future studies should further examine the effects of judo in a larger sample of youth with ASD, and include control conditions (e.g. no-exercise group) for comparison purposes.
vorige artikel Emotion Processing in Children with Conduct Problems and Callous-Unemotional Traits: An Investigation of Speed, Accuracy, and Attention
volgende artikel Adaptation of the Screen for Child Anxiety Related Emotional Disorders in Spanish with Nonspecific Intellectual Disability 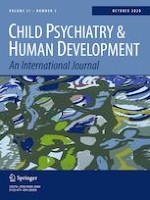 The Temporal Precedence of Peer Rejection, Rejection Sensitivity, Depression, and Aggression Across Adolescence