This two stage study examined the effects of acute exercise on resting electroencephalographic (EEG) patterns of children with attention-deficit hyperactivity disorder (ADHD). The first stage compared the neural oscillatory patterns of children with and without ADHD. Resting EEGs were recorded under an open-eyes condition from 24 boys with ADHD and 28 matched controls. The second stage of the study employed a randomized cross-over trial design. The 24 boys with ADHD engaged in a 30-min intervention that consisted of either running on a treadmill or watching a video on alternative days, with resting EEGs recorded before and after treatment. The first stage found that children with ADHD exhibited significantly higher theta/beta ratios over the midline electrodes sites than controls. The second stage further indicated that children with ADHD displayed smaller theta/beta ratios following the exercise condition compared with the video-watching condition. This finding suggests that acute exercise normalizes arousal and alertness of children with ADHD, as reflected in resting EEG readings. 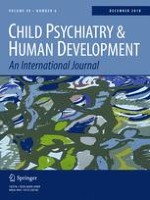 Does Affective Theory of Mind Contribute to Proactive Aggression in Boys with Conduct Problems and Psychopathic Tendencies?

No Medication for My Child! A Naturalistic Study on the Treatment Preferences for and Effects of Cogmed Working Memory Training Versus Psychostimulant Medication in Clinically Referred Youth with ADHD

Executive Attention and Empathy-Related Responses in Boys with Oppositional Defiant Disorder or Conduct Disorder, With and Without Comorbid Anxiety Disorder