This study tested whether a mindfulness-based intervention for obesity that included components aimed at emotion regulation and mindful eating improved psychological outcomes including stress, anxiety, positive emotion, and depression, during the intervention period and at longer-term follow-up. 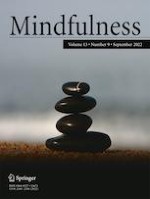 The Correlation Between Self-compassion and Depression Revisited: a Three-Level Meta-analysis

Effects of Kindness- and Compassion-Based Meditation on Wellbeing, Prosociality, and Cognitive Functioning in Children and Adolescents: a Systematic Review

Can the Academic and Experiential Study of Flourishing Improve Flourishing in College Students? A Multi-university Study

The Mindfulness in Couple Relationships Scale: Development and Validation