The present study is designed to evaluate the efficacy of acceptance–commitment therapy (ACT) on craving beliefs in opioid dependent patients on methadone maintenance treatment (MMT). Twenty-eight opioid dependent participants, aged 18–50 years, who were on MMT based on Iran’s Ministry of Health and Medical Education published protocol, were evaluated in Mashhad during 2011–2012. The treatment group comprised fourteen participants, who received eight sessions of individual ACT alongside MMT while fourteen participants of the control group received just MMT. The effectiveness of the intervention was assessed by the craving beliefs questionnaire (CBQ), the action and acceptance questionnaire (AAQ-I) and the mean dosage of methadone the participants consumed in the last 3 days. Assessment was performed three times; the first was before the initiation of ACT (as pretest), the second was 2 weeks after ACT was terminated (as posttest), and the third one was 12 weeks after the termination of ACT (as follow-up). The extracted data were analyzed by two way ANOVA and ANCOVA using SPSS-20. While there was no significant difference in the mean methadone dosage between the treatment and the control group at pretest (p = 0.067), patients in the treatment group had a significantly lower methadone dosage at posttest (p < 0.001) and follow-up (p < 0.001) compared to the control group. There was a significant reduction in the CBQ scores between treatment and control groups at posttest (p = 0.047) and follow-up (p = 0.014). There was also a significant difference in AAQ-I score between treatment and control at posttest (p < 0.001) and follow-up (p < 0.001). It seems that short-term individual ACT is associated with a significant decline in craving beliefs in substance-dependent patients, which lasts for at least 12 weeks after the termination of ACT. 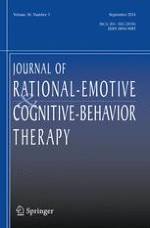 Empirical Investigation of the Relationships Between Irrationality, Self-Acceptance, and Dispositional Forgiveness