To evaluate the effectiveness of the intervention, we conducted a cluster randomized controlled trial that compared outcomes for children assigned to the experimental group (E.G., Gaia program) with those of the control group (C.G.) using hierarchical linear modeling. The intervention was led by instructors within the school curriculum. Emotional/behavioral problems were assessed with the Achenbach Teacher’s Report Form at pre-test and post-test. Four hundred participants aged 6–12 years were recruited from six primary schools (E.G., n = 232; C.G., n = 168).

Teacher-report comparisons revealed that, relative to controls, the E.G. showed significant decreases in total problems, internalizing, externalizing, and in most narrow-band scales at post-intervention. The effect sizes were medium for total problems, externalizing, and attention problems, small to medium for rule-breaking behavior and aggressive behavior, while they resulted small for internalizing and anxiety/depression. While 7.76% of the E.G. showed clinical/borderline levels of total problems before the intervention, 3.87% of this group still showed clinical/borderline levels after the intervention, whereas no children deteriorated, with a significant difference in the direction of change.

Findings from this study indicate that the Gaia program can be delivered by school instructors during a regular curriculum and the intervention is promising for reducing children’s emotional and behavioral problems.
vorige artikel Feasibility and Effectiveness of a Mindfulness-Based Program Vs. Relaxation in the Treatment of Burnout in Brazilian Primary Care Providers: a Mixed-Methods Pragmatic Controlled Study
volgende artikel The Role of Mindfulness in Viewing and Making Art in Children and Adults 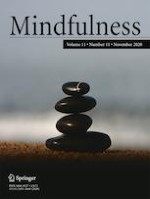 Feasibility and Effectiveness of a Mindfulness-Based Program Vs. Relaxation in the Treatment of Burnout in Brazilian Primary Care Providers: a Mixed-Methods Pragmatic Controlled Study