This study was aimed to investigate the effects of social versus non-social stimuli on postural responses in 21 boys with autism spectrum disorder (ASD) (mean age of 11.6 ± 1.5) compared with 30 typically developing (TD) boys (mean age of 11.7 ± 1.8). Postural control of children was examined while they were standing on a force plate and viewing images of an object, male face, or female face in sequence. Each image was shown in two trials and each trial lasted for 20 s. Results indicated a significant interaction between group and task (p < 0.05), meaning that children with ASD but not TD children showed an increased postural sway during face tasks than during object task. Furthermore children with higher autism severity compared to those with lower severity showed an increased change in response to social stimuli (p < 0.01). It seems that the postural control of children with ASD was more affected by the social stimuli than TD children. 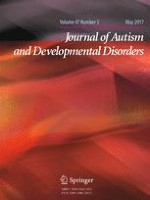 Brief Report: What Drives Parental Concerns About Their 18-Month-Olds at Familial Risk for Autism Spectrum Disorder?

A Relationship Between Early Language Skills and Adult Autistic-Like Traits: Evidence from a Longitudinal Population-Based Study

Depression in Parents of Children Diagnosed with Autism Spectrum Disorder: A Claims-Based Analysis