Academic burnout is characterised by mental and emotional distress among different populations of learners. Rational emotive-behaviour therapy (REBT) has shown great promise in helping students manage mental distress. As such, this study determined the effect of an REBT program on burnout among 138 adult learners who are also teachers. We also investigated the extent to which learners' characteristics such as age, gender, academic level, and marital status moderated the REBT program's effect. The participants were assigned to the intervention group (n = 69) and control group (n = 69). The intervention group participated in the REBT program for eleven weeks while the control group received placebo treatment during this period. Burnout scores were measured at pretest, posttest and follow-up using the Oldenburg Burnout Inventory for Students (OLBI-S). The study found that adult learners who took part in the school-based REBT program had significant improvement in their burnout scores over time compared to adult learners who did not participate in it. Hence, the REBT program was effective in helping adult learners who are teachers manage their burnout. Learners’ demographic factors (gender, academic level, marital status and age) did not significantly moderate the REBT program's effect on burnout. The researchers discussed the significance of the findings and offered recommendations for future studies.
vorige artikel The Application of Maultsby’s Rational Behavior Therapy in Psychosis – A Case Report 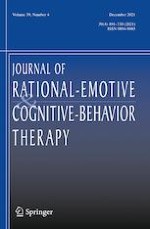 Dispositional Mindfulness Profiles and Cannabis Use in Young Adults