Coronary artery disease is the main cause of mortality and morbidity worldwide [ 1, 2]. Throughout the last decade improvements in the diagnosis and treatment of atherosclerosis have caused a marked reduction in the morbidity and mortality in men, whereas the rate of recurrent atherothrombotic events, including cardiovascular death, in women has increased [ 3, 4]. Since platelet reactivity plays a pivotal role in thrombus formation and atherosclerosis, dual antiplatelet therapy with both aspirin and clopidogrel has become the cornerstone in the treatment of patients undergoing coronary stent implantation and those presenting with acute coronary syndrome (ACS) [ 5, 6]. However, previous studies have suggested that women do not accrue equal therapeutic benefit of antithrombotic therapy [ 7, 8]. Although multiple contributing factors have been described, the physiological mechanism behind this gender disparity remains unclear [ 9]. Therefore, the aim of the present study is to compare the magnitude of on-treatment platelet reactivity between genders in patients on dual antiplatelet therapy undergoing elective coronary stenting.

The POPular study ( The Do Platelet Function Assays Predict Clinical Outcomes in Clopidogrel Pretreated Patients Undergoing Elective PCI study) was a prospective, observational study including consecutive patients with established coronary artery disease scheduled for elective coronary stent implantation. The entry and exclusion criteria were described in the original publication. The POPular study has established that patients exhibiting a high on-treatment platelet reactivity status were at higher risk for adverse events post-PCI [ 10].
In the present sub-analysis all patients were on dual antiplatelet therapy with adequate clopidogrel treatment (defined as a maintenance dose of 75 mg daily for >5 days, a loading dose of 300 mg at least 24 h before PCI or 600 mg at least 4 h prior to PCI) and low-dose aspirin of 80–100 mg daily for at least 10 days. Patients were excluded when they had a whole blood platelet count <150,000/μL or had used medication (other than aspirin or clopidogrel) known to have any effect on platelet reactivity (i.e. NSAIDs, dipyramidole, glycoprotein (GP) IIb/IIIa-inhibitors) within 1 week prior to inclusion. The study was conducted according to the principles of the Declaration of Helsinki and the laws and regulations applicable in the Netherlands. All patients gave written informed consent.

The clinical endpoint was a combination of all-cause death, non-fatal myocardial infarction (defined as the occurrence of ischaemic symptoms as well as a spontaneous troponin T value or creatine kinase MB greater than the upper limit of normal), definite stent thrombosis (according to the Academic Research Consortium criteria) [ 11] and ischaemic stroke. An independent committee, blinded for platelet function data, adjudicated all endpoints through review of source documents of medical records.

Light transmittance aggregometry (LTA) was performed using an APACT 4004 aggregometer (LABiTec, Arensburg, Germany) at 37°C. Platelet poor plasma (PPP) was used as a reference for 100% aggregation and maximal platelet aggregation (%) was measured in non-adjusted platelet rich plasma after stimulation with arachidonic acid (AA) in a final concentration of 0.5 mg/ml to determine on-aspirin platelet reactivity and adenosine diphosphate (ADP) in a final concentration of 20 μmol/L to determine on-clopidogrel platelet reactivity.

Continuous variables were expressed as mean ± SD, unless otherwise specified, and categorical variables as frequencies (%). All distributions were checked for normality. Differences in continuous variables were compared by independent t-test or Mann–Whitney U test, as appropriate. Dichotomous variables were compared by chi-square test or Fisher’s exact test.
Covariate adjustment using a propensity score was performed to reduce confounding factors in the comparison of the magnitude of platelet reactivity between genders. The propensity score was defined as the probability of being a man depending on the baseline characteristics of each patient and used to account for imbalances in the distribution of these characteristics between genders. Prior to calculation of the propensity score, missing data were imputed using the program R. The propensity score for each patient was determined using the following characteristics as covariates in a logistic regression model: clinical characteristics (i.e. classic cardiovascular risk factors, previous myocardial infarction (MI), previous percutaneous coronary intervention (PCI) or previous coronary artery bypass graft surgery (CABG), renal failure, left ventricular ejection fraction <45%), co-medication (i.e. use of clopidogrel loading dose and concomitant use of statins, β-blockers, angiotensin converting enzyme inhibitors, coumarin derivates, calcium channel blocker, proton pump inhibitor, upstream GP IIb/IIIa inhibitor-therapy), laboratory parameters (platelet count, mean platelet volume, white blood cell count, red blood cell count, haemoglobin and haematocrit) and procedural risk factors (i.e. total stent length, number of lesions treated, number of stents implanted, bifurcation stenting, graft stenting, left anterior descending coronary artery (LAD), type of stent implanted (bare-metal stent (BMS), drug-eluting stent (DES) or both) and minimal stent diameter). Subsequently, linear regression analysis was performed to compare the magnitude of platelet reactivity between genders, using the propensity scores as a covariate.
To evaluate whether the cut-off value to identify patients at higher risk of atherothrombotic events was similar between genders, a receiver-operator characteristic (ROC) curve analysis was calculated for each test in both genders. The optimal cut-off level was calculated by determining the smallest distance between the ROC curve and the upper left corner of the graph. To determine whether the cut-off for both genders was similar, a heterogeneity index was calculated. All data were analysed with SPSS version 17.0 (SPSS, Chicago, IL) and R (version 2.9 http://​r-project.​org) and a two-sided p-value <0.05 was considered significant.

A total of 1069 consecutive patients undergoing elective PCI with stent implantation were enrolled, of whom 951 were on aspirin >10 days. The latter comprised the present study population. Due to irregularities in platelet assay supply, as well as technical failure in a minority of platelet function tests, not all platelet function assays were performed in every patient. ADP-induced LTA was performed in 936 patients; AA-induced LTA was performed in 925 patients and the VerifyNow P2Y12 Assay in 940 patients. Since use of the VerifyNow® Aspirin cartridge did not start until halfway through the POPular study, this assay was performed in less than half of the population ( n = 422). Of the patients, 234 were female (24.6%) and 717 were male (75.4%). Baseline characteristics are depicted in Table  1. Women were significantly older than men and were more likely to have a familial history of coronary artery disease (CAD). Furthermore, women had a higher platelet count and a lower haemoglobin value.
Table 1
Baseline characteristics of study population
Definitions
Hypertension: Systolic blood pressure >140 mmHg or diastolic blood pressure >90 mmHg
Hypercholesterolaemia: A fasting LDL cholesterol ≥3.4 mmol/L or being on statin therapy at the time of inclusion
Diabetes mellitus: According to the World Health Organization criteria
Family history: One or more first-degree relatives have developed CAD before the age of 55 years (men) or 65 years (women)
Renal insufficiency: Serum creatinine >120 μmol/L

Receiver operator characteristic curve (ROC) analysis demonstrated that the cut-off value to identify patients at higher risk of atherothrombotic events was not significantly different between genders (all p-values for heterogeneity > 0.10). 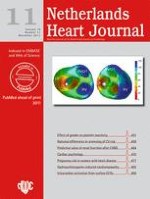 Which method of estimating renal function is the best predictor of mortality after coronary artery bypass grafting?

Female platelets are hard to control

Noninvasive detection of epicardial and endocardial activity of the heart

Pre-pregnancy risk assessment and counselling of the cardiac patient

Congenital absence of the pericardium