It is generally believed that there is a beneficial effect of collaterals on death and re-infarction statistics in patients with coronary artery disease (CAD) but studies to date are small and inconsistent.

To meta-analyse the studies published in this field in order to obtain more powerful information.

We searched Medline and major journals (2000 to 2011) for studies evaluating the effect of coronary collaterals on mortality. Publication bias, lack of heterogeneity, and lack of robustness were assessed using the standard procedures for such purposes.

A total of 10 studies describing mortality, enrolling 6791 participants, were included in this analysis. In patients with collateralisation a significant relation with reduced mortality was seen compared with those without collateralisation, at an odds ratio of 0.47, p < 0.0001, and a reduction in deaths and re-infarctions at 0.54, p < 0.0001. Some publication bias, some heterogeneity and some lack of robustness were demonstrated. A meta-regression with the odds ratios of the presence of traditional atherosclerotic risk factors as predictors and the odds ratios of mortality and the composite deaths and re-infarctions as outcome showed no relationships.

In CAD patients from the post-percutaneous coronary intervention era the presence of collaterals reduced mortality by 0.47 (p < 0.0001) and deaths and re-infarctions by 0.54 (p < 0.0001). Furthermore, in the present meta-data, the atherosclerotic risk factors were no more present in patients with collaterals than they were in those without. 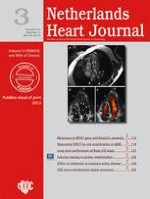 Palpitations, should one worry?