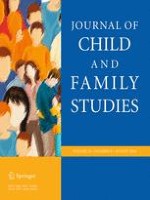 Criminally Involved Parents Who Misuse Substances and Children’s Odds of Being Arrested as a Young Adult: Do Drug Treatment Courts Mitigate the Risk?

The Relationship Between Emotion Knowledge, Emotion Regulation and Adjustment in Preschoolers: A Mediation Model