Obesity and high body fat percentages are a major public health issue. The percentage of obese and overweight Americans has increased over the past 30 years. On average, overweight individuals with higher percent body fat than normal weight individuals are at increased risk for numerous negative outcomes both physically and mentally. A prime time to investigate changes in body composition and associated psychological influences on decision making is during the emerging adulthood period. The first few years of college are a time when adolescents begin to regulate for themselves their own eating behaviors. Previous research shows that freshmen gain weight and increase in percent body fat during their first year of college. The current study addresses the limitations of previous research by investigating (1) individual growth in percent body fat over a longer period of time in college than previous available research and (2) important psychological and sex differences in this growth. This study measures percent body fat across the first 3 years of college at 8 time points for 542 undergraduates (351 females, 65 %; 191 males, 35 %). Longitudinal data analysis was conducted to identify changes in percent body fat, psychological predictors of those changes, and how changes differ for males and females. Our study found that significant increases exist in percent body fat during undergraduates’ college years and that change differs for males and females. In addition, through the use of nested hierarchical models, eating regulation style (autonomous or controlled regulation), appearance schema (self-evaluative salience or motivational salience), and body satisfaction were identified as influential predictors of change in percent body fat. For example, young females, who do not feel in control of their physical appearance yet spend a great deal of time maintaining their appearance, have the highest initial body fat percentage and the steepest increase in percent body fat. Overall, males and females with high autonomous regulation and high motivational salience are likely to maintain (instead of increase) percent body fat over the college years. Knowing the influence of these predictors can be useful for promoting health and intervening with young adults in the college setting and other emerging adults who are not enrolled in postsecondary institutions. 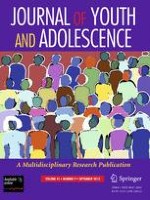 Characterizing the Self-System over Time in Adolescence: Internal Structure and Associations with Internalizing Symptoms

Discrepancies Between Youth and Mothers’ Perceptions of Their Mother–Child Relationship Quality and Self-Disclosure: Implications for Youth- and Mother-Reported Youth Adjustment

Homophobia and the Transition to Adulthood: A Three Year Panel Study among Belgian Late Adolescents and Young Adults, 2008–2011