Robust evidence supports that girls and boys who experience early pubertal timing, maturing earlier than one’s peers, are vulnerable to developing symptoms of depression. However, it has yet to be clarified whether early pubertal timing confers vulnerability to African American as well as to Caucasian adolescents and whether this vulnerability is specific to depressive symptoms or can be generalized to symptoms of social anxiety. In previous studies, one race or one sex was examined in isolation or sample sizes were too small to examine racial differences. Our longitudinal study consisted of a sample of 223 adolescents (Mage = 12.42, 54.3 % female, 50.2 % African American, and 49.8 % Caucasian). At baseline, depressive symptoms, social anxiety symptoms, and pubertal timing were assessed by self-report. Nine months later, we assessed depressive symptoms, social anxiety symptoms, body esteem, and stressful life events that occurred between baseline and follow-up. Analyses indicated that early pubertal timing interacted with stressful life events to predict increased symptoms of depression, but only for Caucasian girls and African American boys. Results were found to be specific to depressive symptoms and did not generalize to symptoms of social anxiety. Additionally, there was a significant positive indirect effect of pubertal timing on symptoms of depression through body esteem for Caucasian females.
vorige artikel The Development of Adolescent Generalized Anxiety and Depressive Symptoms in the Context of Adolescent Mood Variability and Parent-Adolescent Negative Interactions
volgende artikel Affective, Biological, and Cognitive Predictors of Depressive Symptom Trajectories in Adolescence 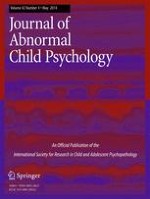 What Causes Internalising Traits and Autistic Traits to Co-occur in Adolescence? A Community-Based Twin Study

Behavioral and Emotional Problems on the Teacher’s Report Form: A Cross-National, Cross-Clinic Comparative Analysis of Gender Dysphoric Children and Adolescents

Developmental Trajectories of Anxiety Symptoms in Early Adolescence: The Influence of Anxiety Sensitivity