Girls’ early pubertal timing has been linked in many studies to behavioral problems such as delinquency and substance use. The theoretical explanations for these links have often involved the girls’ peer relationships, but contexts have also been considered important in some explanations. By integrating two theoretical models, the peer-socialization and the contextual-amplification hypotheses, we propose a contextual framework for explaining the link between early pubertal timing and external problem behavior in girls. We hypothesize that early developing girls engage in unhealthy, dangerous, and risky behavior under contextual conditions that promote access to older friends and opposite-sex relationships. Under other conditions it is less likely. We tested this integrated hypothesis in two studies conducted in Sweden. The first was a cross-sectional study with information about school and free-time friends in a community sample (N = 284). Early pubertal timing was linked to having older, more normbreaking friends outside of school, but not in school, thus suggesting that the school context interferes early-developing girls’ selection of older peers. The second study involved both a longitudinal (N = 434) and a cross-sectional sample of girls (N = 634), where we examined a leisure setting that is known to attract delinquent youth. Results showed that early pubertal timing was most strongly linked to delinquency for girls who spent time in this context and were heavily involved with boys and peers. In sum, results from both studies supported our predictions that certain contexts would amplify the peer-socialization effect. Overall, we conclude that the integrated peer-socialization/contextual-amplification model satisfactorily explains the link between pubertal timing and external problem behavior. 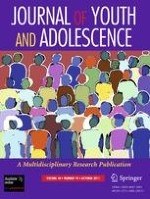 The Effect of Pubertal and Psychosocial Timing on Adolescents’ Alcohol Use: What Role Does Alcohol-Specific Parenting Play?

Pubertal Timing and Substance Use in Middle Adolescence: A 2-Year Follow-up Study