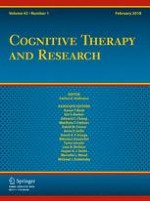 Distress Intolerance Moderation of Attention to Emotion: An Eye-Tracking Study

Efficacy of Combined Cognitive-Behavioral Therapy for Insomnia and Pain in Patients with Fibromyalgia: A Randomized Controlled Trial

Fluctuations in Hallucination Spectrum Experiences Co-vary with Social Defeat but not with Social Deafferentation. A 3-Week Daily Assessment Study

Moderators of Symptomatic Outcome in Metacognitive Training for Psychosis (MCT). Who Benefits and Who Does Not?