Prior work has suggested a paradoxical positive relationship between the risk behavior alcohol use and the health behavior exercise, particularly in young adults. Though seldom tested, different theoretical perspectives exist on the mechanisms that may explain the positive relationship. The aims of this study were to test theorized mechanisms of association, including common causes shared by both behaviors (e.g., personality, motives, affective), compensatory processes such as exercising to compensate for calories from alcohol consumption, and methodological confounds (e.g., between vs. within subject effects) in a college sample (N = 132; 56.3% male; 76% Caucasian; M age = 19.15, SD = 0.99) using a cross-sectional design and time line follow back methods. A positive, between-subjects association between alcohol and exercise was found and explained by exercising to compensate for calories of alcohol consumption, enhancement motives, and physical activity enjoyment. However, we also observed a significant and negative within-subjects association between the two constructs, suggesting that, on a given day, individuals who exercise more tended to drink less. Furthermore, individuals who exercised more during the week tended to have declines in weekend drinking over time. Results suggest a complex relationship between exercise and alcohol use among young adults, and highlight the importance of distinguishing between and within subject processes, as well as the temporal ordering of the two behaviors. Implications are discussed in regard to theory, prevention, and intervention. 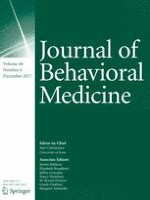 Stationary cycling exergame use among inactive children in the family home: a randomized trial

Experiencing is believing: prior experience moderates the impact of self-based and socially-based cues in the context of blood donation