Participant descriptives are shown in Table  1. 21 children on the autism spectrum (two girls) and 21 typical children (three girls) aged between 8 and 14 years participated in this study. All children were recruited via local community contacts in the South West region of the United Kingdom. Autistic children had received an independent clinical diagnosis of either autism (n = 15) or Asperger syndrome (n = 6), according to DSM-IV-TR (APA, 2000) or ICD-10 (WHO 1992) criteria, and further scored above the threshold for autism spectrum disorder on the Social Communication Questionnaire (SCQ; Rutter et al. 2003) and on the Autism Diagnostic Observation Schedule—Generic (ADOS-G; Lord et al. 1999) (see Table  1).
Table 1
Descriptive characteristics for children with autism and typically developing children
aStandard scores on the British Picture Vocabulary Scale—2nd Edition (BPVS; ref)
bRaw scores on Raven’s Standard Progressive Matrices (Raven et al. 1991)
cTotal scores on the Social Communication Questionnaire (SCQ; Rutter et al. 2003)
dADOS-G = Autism Diagnostic Observation Schedule—Generic (Lord et al. 1999); Elevated scores on the SCQ and ADOS-G reflect greater levels of autistic symptomatology
Children were included in this study only if they achieved a standard score of 80 or above on the British Picture Vocabulary Scale—2nd Edition (BPVS; Dunn et al. 1997) and were free of medication. Typical children neither scored above the cut-off for autism on the SCQ (indicative of low levels of autistic symptomatology) nor had a current or past developmental condition, as reported by parents. The autism and typical groups did not differ significantly in terms of chronological age, t(40) = 0.54, p = .590, verbal ability as measured by the BPVS, t(40) = 0.78, p = .440, or nonverbal ability, t(40) = 0.05, p = .960, as measured by the Raven’s Standard Progressive Matrices (Raven et al. 1991).

‘Drawing Corners’ Task (Based on Smith and Gilchrist 2005a)

Two different configurations of stimuli were created with the printed figure in the upper portion of an A5 sheet of paper (portrait orientation). The first, Grouped set consisted of four corners arranged to form a 6 × 6 cm square (see Fig.  1a). To provide some variability (and therefore to reduce the monotony of the task for children), there were three different sizes of gaps between the corners: 1, 3 and 5. Each gap size was presented four times, yielding 12 trials for the Grouped condition.
×
The second, Skewed set of stimuli consisted of corners whose orientation had been systematically rotated by 10° (see Fig.  1b). Rather than the adjustment of gap size, task variability in this condition was achieved by specifying six different types of stimulus, depending on the number of elements that were skewed (two or four), the direction of the skew (clockwise or anticlockwise) and the location of the skewed elements (top-left and bottom-right, bottom-left and top-right, or all elements). Half of the trials within each orientation contained only two rotated corners; the remaining trials had all four rotated. Despite rotations, the vertices of all of the elements formed the same 6 × 6 cm square. Each of these stimuli were presented twice, and all 24 trials were presented in a different randomised order for each child.
Children were told, “I have some pictures that I would like you to copy.” The first stimulus was placed in front of the participant. They were instructed to “copy the picture as accurately as possible in the space below”. When the participant had finished copying, they were given the next stimulus. This procedure continued until all 24 trials had been completed. There was no time limit for this task, and drawing time was not recorded, although children took approximately 10 min to complete all 24 trials.
All drawings were independently coded by one of two trained raters who were blind to participant details (i.e., group, age, gender); 5 % of these codes were second coded by a third trained rater. Using the same technique as Smith and Gilchrist ( 2005a), measures of the global qualities of drawings were derived from angle and length measurements taken directly from the drawing (as illustrated in Fig.  2a). These measurements were then processed trigonometrically to derive the relative locations of each vertex. Since, in both the Grouped and Skewed conditions, the vertices of the model always formed a 6 × 6 cm square, global error was conceived as the deviation away from that square configuration, irrespective of either the local orientation of individual corner elements or the angle between the two lines that formed each corner element.
×
By comparing the scalar properties of the square formed by the vertices of the copy to those in the model (i.e., deviations from a 6 × 6 cm square), we formulated two global metrics that could be applied to both Grouped and Skewed stimuli. These were (1) the internal angular accuracy of the square (expressed as an error in degrees) and (2) its height/width ratio. For this latter measurement, a score of 1 would indicate a perfect square, with equal height and width (i.e., a ratio of 1:1), whereas a deviation from a square would be indicative of a more oblong shape (i.e., a positive value if the shape is taller than it is wide, and a negative value if the shape is wider than it is tall). This principle is illustrated in Fig.  2b.
Local scores were more detailed than those calculated by Smith and Gilchrist ( 2005a) and were derived from a checklist that required the raters to code properties of each local corner element (e.g., number of lines, orientation) as well as whether there were omissions of corner elements or the individual line segments thereof. The qualities of local elements were systematically scored according to three key factors: (i) whether local corners were formed of two line segments; (ii) whether corners formed an angle between 67.5°–12.5° (i.e. within 45° of the correct 90° angle); and (iii) whether the corners were correctly oriented (i.e. a ‘top-left’ vertex should have one line extending downwards and another rightwards). Each corner was scored regarding the presence (score of ‘1’) or absence (score of ‘0’) of each of these factors, yielding a maximum score of three for each factor and a maximum total score of 12 (summing across all four corners).

The CEFT was used to measure local–global information processing. The test includes two sets, incorporating three practice trials and 25 test trials. In each set, children initially were shown a cardboard cut-out of a target shape (set A: triangle; set B: house) and asked to find this shape hidden in a larger meaningful figure (e.g., a pram) as quickly as possible (set A: 11 trials; set B: 14 trials). Response latencies and accuracy were recorded for each trial. Children were given a maximum of 30 s to locate the target stimulus on each trial. One point was given for each trial on which they successfully located the hidden target. If the triangle was not located within the time limit, then an error was recorded, and the maximum time (30 s) was given for that trial. The dependent variable of interest was time taken to find the hidden figure. Autistic children typically perform faster on this task than typical children do, purportedly because they are not captured by the global image, allowing them to focus on the individual elements and quickly find the hidden target (Shah and Frith 1983). As such, fast times on the CEFT reflect good local processing (and, hence, poorer global processing).

In this test of higher-order planning ability (based on Shallice 1982), children were presented with a wooden pegboard consisting of three vertical pegs of increasing size (small, medium, big) and given three coloured beads (red, white, black), which they arranged in a particular configuration (start state). They were then shown a picture of the beads in a different configuration (goal state). Children were instructed to move the beads from the start state to the goal state in as few moves as possible (shown clearly on the bottom of each picture). They were also told that they (a) could only move one bead at a time and (b) must not place beads on the table. There were three practice trials followed by problem sets of increasing difficulty, including four trials of one-, two-, three-, four-move, and five-move problems. Testing ceased if a child failed all of the problems within a set. Successful performance on this task required children to identify the sequence of steps required to solve a novel problem. Children were therefore given one point for each trial if they reached the goal state within the minimum number of moves and without violating any rules (maximum score = 20). Higher scores reflect better planning ability.

Ethical approval for this study was granted by the University of Bristol’s Faculty of Science Human Research Ethics Committee. Parents of all children gave informed written consent for their child’s participation; children also gave their assent to take part. Children were seen individually on a single occasion at the university. Tests of verbal and nonverbal ability were always administered first followed by the drawing corners game and other behavioural measures, the order of which was randomized across participants.

Examples of children’s copies are illustrated in Fig.  2. These were measured to produce global accuracy indices of internal angular error and height/width error (of the square formed by the four vertices). Owing to the sensitivity of these measurements, inter-rater reliability was assessed: The intraclass correlation for double-coded measurements indicated excellent inter-rater reliability, r ic(255) = 0.99, p < .001. Local accuracy measures were categorically coded on the basis of the presence or absence of features, their relationship with each other, and their orientation on the page. Analyses were performed using SPSS version 22 software (IBM International).

Every drawing received a score out of 12, with each of the four corners being scored on whether they were (1) constructed of two elements, (2) appropriately angled, and (3) appropriately oriented). The total score was expressed as a percentage, it is clear that the majority of copies were accurate at the local level (see Table  2). Cautious of the high number of completely accurate responses (i.e. 100 % across factors and corners), data for Grouped and Skewed conditions were submitted to Shapiro-Wilks analysis and neither was found to be normally distributed (Grouped: W = .790, p < .001; Skewed: W = .940, p < .050). In the absence of a non-parametric alternative for a mixed-design ANOVA, we subjected the data to a series of focused non-parametric analyses. To test for group differences in each condition we conducted Mann–Whitney analyses, which revealed no difference between autistic and typical children for Grouped stimuli ( U = 161, p = .130) or for Skewed stimuli ( U = 167, p = .180). To test for within-group effects of condition, related-samples Wilcoxon tests were conducted, separately for each group, to confirm whether there was a difference between Grouped and Skewed stimuli. In this case, autistic children showed a significant difference between conditions, with higher local scores for Grouped stimuli ( Mdn = 97.9, IQR = 13.2) than for Skewed stimuli ( Mdn = 91.7, IQR = 20.1): Z = −3.14, p = .002. This was the same for typical children, who demonstrated higher local scores for Grouped stimuli ( Mdn = 98.6, IQR = 7.64) compared to Skewed stimuli ( Mdn = 93.8, IQR = 13.2): Z = −3.23, p = .001. Note, however, that these data may be subject to a ceiling effect and so all analyses should be interpreted with some caution.
Table 2
Median local scores for each category, expressed as a percentage of the total achievable score (interquartile range in parentheses) 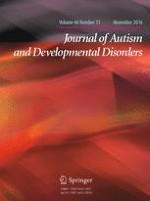