Implantable cardioverter defibrillators are implanted on a large scale in patients with heart failure (HF) for the prevention of sudden cardiac death. There are different scenarios in which defibrillator therapy is no longer desired or indicated, and this is occurring increasingly in elderly patients. Usually device therapy is continued until the device has reached battery depletion. At that time, the decision needs to be made to either replace it or to downgrade to a pacing-only device. This decision is dependent on many factors, including the vitality of the patient and his/her preferences, but may also be influenced by changes in recommendations in guidelines. In the last few years, there has been an increased awareness that discussions around these decisions are important and useful. Advanced care planning and shared decision-making have become important and are increasingly recognised as such. In this short review we describe six elderly patients with HF, in whose cases we discussed these issues, and we aim to provide some scientific and ethical rationale for clinical decision-making in this context. Current guidelines advocate the discussion of end-of-life options at the time of device implantation, and physicians should realise that their choices influence patients’ options in this critical phase of their illness. 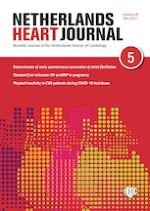 Emergency department presentations because of atrial fibrillation: too many, too soon

Physical inactivity in times of a pandemic: another curve to flatten