Growing academic interest in mindful parenting (MP) requires a reliable and valid measure for use in research and clinical setting. Because MP concerns the way parents relate to, and nurture, their children, it is important to evaluate the associations between self-reported MP and observed parenting and parent-child interaction measures.

Seventy-three mothers who experience difficulties with their young children aged 0–48 months admitted for a Mindful with your baby/toddler training (63% in a mental health care and 27% in a preventative context) were included. Mothers completed the Interpersonal Mindfulness in Parenting scale (IM-P) and video-observations of parent-child interactions were coded for maternal sensitivity, acceptance, mind-mindedness, and emotional communication (EC).

The current study provides support for the hypothesis that the IM-P total score is predictive of maternal actual attention for the child during a face-to-face interaction. When the IM-P is administered with the aim to gain understanding of different aspects of parenting behavior and the parent-child interaction, it is important not only to employ the IM-P total score but also to incorporate the individual IM-P subscales, as meaningful associations between IM-P subscales and observed parenting and parent-child interactions were found.
Opmerkingen

The mothers in the current study (N = 73) also participated in (published and ongoing) studies examining the effectiveness of the “Mindful with your baby/toddler” interventions (Potharst et al. 2017; Potharst et al. 2018; Zeegers et al. 2019). Forty-six mothers and their children (63%) participated in the training in a mental health context. These mothers had been referred to the training for reasons like maternal mental health problems, child regulation problems, or parent-child interaction problems. Twenty-seven (37%) of the mothers and their children participated on their own initiative, in a preventative context. These mothers wished to take part because they wanted, for example, to learn to better deal with parenting stress, take better care of themselves as parents or improve the contact with their children. For one mother, socio-demographic information was unavailable. Percentages were calculated on the basis of the remaining 72 participants. Thirty-eight mothers (52%) received psychological or pedagogical treatment prior to the training. During the intake that took place before the training, mothers reported to the trainer symptoms of depression (N = 26; 36%), anxiety disorders (N = 19; 26%), and post-traumatic stress disorder (N = 8; 11%). The majority of the participants had at least one of these mental health problems (41; 57%).
Fifty-two mothers (71%) were admitted to the Mindful with your baby training and had infants aged 0 to 18 months, and 21 mothers (29%) were admitted to the Mindful with your toddler training and had toddlers between the age of 18 and 48 months. The mean age of the mothers was 35.2 years (SD = 4.2), and the mean age of the children 1.3 years (SD = 1.00; range .12–3.86 years). Forty-two of the children were boys (57.5%), and 54 were firstborns (74%). Thirty-eight (52%) mothers had a job [5 (7%) full-time, and 33 (45%) part-time], seventeen (23%) mothers were on sick leave, 4 (6%) mothers were on parental leave, and thirteen (18%) mothers chose to stay at home with their child and not to work. Employment status of one mother (1%) was unknown. Level of education was high in 61 (84%) mothers, low to moderate in 11 (15%) mothers, and unknown in one mother (1%). The ethnical background of was Dutch in 56 (78%) of the mothers, and the remaining as follows: Surinam (3, 4%), Turkish (2; 3%), Moroccan (2; 3%), Polish (2; 3%), German (2; 3%), Indian (1; 1%), Spanish (1; 1%), Eritrean (1; 1%), Italian (1; 1%), American (1; 1%), Romanian (1; 1%).

The data for the current study were retrieved from datasets of studies examining the effectiveness of the Mindful with your baby and Mindful with your toddler training. The starting dates of the trainings were between October 2015 and May 2020 and took place in Amsterdam and in The Hague. Only data that was gathered before participation in the training was used in the current study, namely in either the waitlist assessment or the pretest assessment. Whereas the pretest assessment was administered to all participants in the week prior to the start of the training, the waitlist assessment was administered only in case participants were admitted more than 5 weeks prior to the training. Data from the first available measurement occasion was used, unless the pretest assessment was more complete than the waitlist assessment. The design of the study consisted of a home-visit to video record a 10-min free-play session and a 4-min face-to-face parent-child interactions, as well as several online questionnaires. For the current study, only the IM-P questionnaire was used. For the face-to-face interaction observation, a two-sided camera was employed to capture both the mother’s and the child’s face and upper body. In the period between March and May 2020, home visits were not possible because of the measures that were taken in prevention of the COVID-19, and thus, video-observations were collected online (N = 8; 11%). Participants were only included in the current study if they had completed the IM-P, participated in the video-observations, and spoke Dutch with their child in the video-observation.

Missing inspection revealed that 1.5% of the IM-P items was missing. It was therefore chosen to use mean subscale scores instead of sum subscale scores, so that it was still possible to calculate all subscale scores for all participants. Inspection of variable distributions indicated sufficient normality; skewness and kurtosis of all variables were < |2|, except for appropriate mind-related comments, and mother’s gaze. Two, and two outliers (Z > |2.58|) respectively were replaced by the next most extreme value at the end of the distribution of this variable (Field 2009). Correlation analyses were performed to assess the associations between the IM-P and its subscales and parental behavior and mother-child interaction outcomes. To test whether dimensions of MP (IM-P subscales) predicted observational measures of mother-child interactions (sensitivity/acceptance, mind-mindedness, emotional communication/dyadic synchrony) linear multiple regression analyses were conducted using a deletion approach, which consists in initially testing a full model containing all predictors, and then sequentially deleting in subsequent models those predictors that make the least contribution to the model (Tabachnick et al. 2019). In the interest of parsimony, for each outcome, the model that contained the fewest predictors was selected [non-significant predictors with p > .1 were removed] but only where there was no significant change in the predictive power (p F Δ R2 < .05) of the model. To ensure comprehension, data from the full model and the selected model were reported. Only significant models or borderline significant models containing at least one significant predictor were fully reported in the Results section. Prior to running the main analyses, the degree to which residuals met the assumptions of multivariate analysis were assessed through statistical tests and graphical representations. Mahalanobis distance scores indicated no multivariate outliers. Preliminary analyses revealed violation of the assumptions of homoscedasticity for one outcome: mother’s gaze. Therefore, for this outcome variable weighted least squares regression analysis was used instead of linear regression analysis (Field 2009). No multicollinearity was found. For the full models, the highest VIF was 1.76 (average 1.51), 1.60 (average 1.47), and 2.48 (average 1.78) for the Sensitivity/Acceptation, mind-mindedness, and the emotional communication models, respectively. For the only final model containing > 1 predictor (Sensitivity), the average VIF was 1.1.

Mindful Parenting as a Predictor of Observed Parent-Child Interaction

A post hoc power analysis was conducted using the software G*Power (Faul et al. 2007). For the calculation, the 6-variables models were used and an alpha error probability of .05 was selected. Furthermore, we used the mean effect size that we have found in the current study (f2 = .22). With a sample size of 73, a power of .83 was revealed. This means that for analyses in which an effect size of f2 = .22 was shown, and 73 participants were included, power was acceptable. It should be noted, however, that in the analyses showing higher effect sizes (emotional communication/dyadic synchrony) sample size was smaller, and in the other analyses, effect sizes were smaller.

The current study had several limitations. A large proportion on the data of some of the outcomes (emotional communication/dyadic synchrony) was missing, which may have negatively influenced power for these specific outcomes. Another limitation was the generalizability of the results. Although this study has a clinically representative population, the results cannot be generalized to all parents. Another limitation was that some of the IM-P subscales showed insufficient reliabilities. It may be that not all items are appropriate for the age category that we included in the current study. Strengths of the current study were the fact that it made use of relatively objective outcome measures, and the wide variety of outcome measures that were used. Future research could examine the question which adjustments of the IM-P are needed for parents with infants and toddlers. It could also be studied which factors, such as depression, influence the parental perception of their own MP. Furthermore, a more comprehensive understanding of the value of self-reported MP could be gained by studying the relation between the IM-P and the way in which a child reacts to the parent, and thus include additional constructs such as observed child behavior or emotional communition. Also, the value of partner-perceived mindful parenting in the prediction of quality of parenting behavior or the parent-child interaction could be explored, or whether it is possible to develop an observational measure of MP. Finally, it would be interesting to examine if a change in MP, for example, after following a MP training, is associated with a change in observed parental behavior and parent-child interaction.
Overall, the current study advances preliminary evidence on the relation between the IM-P total score and several dimensions of maternal parenting and parent-child interaction in mothers with young children who seek a Mindful with your baby/toddler training because they experience difficulties in caregiving. The IM-P total score was related to an outcome that represents the attention for, and presence with the child of the mother, namely mother’s gaze to the child. Furthermore, specific dimensions of MP were predictive of specific aspects of maternal behavior or the mother-child interaction. For example, mothers who self-rated high on Listening with Full Attention made less mistakes when they made mind-related comments to their child, and mothers who self-rated high on Compassion for the Child were more sensitive to their child, and displayed positive facial expressions more often than mothers who scored lower on Listening with Full Attention or Compassion for the Child, respectively. When the IM-P is administered with the aim to gain understanding on the quality of parenting, it is important to not only look at the results of the IM-P total score, but to attend to the outcomes of the different subscales.

The study was approved by the Ethics Committee of the University of Amsterdam, and written informed consent was obtained from all mothers included in the study.

The authors declare that they have no conflict of interest.
Open Access This article is licensed under a Creative Commons Attribution 4.0 International License, which permits use, sharing, adaptation, distribution and reproduction in any medium or format, as long as you give appropriate credit to the original author(s) and the source, provide a link to the Creative Commons licence, and indicate if changes were made. The images or other third party material in this article are included in the article's Creative Commons licence, unless indicated otherwise in a credit line to the material. If material is not included in the article's Creative Commons licence and your intended use is not permitted by statutory regulation or exceeds the permitted use, you will need to obtain permission directly from the copyright holder. To view a copy of this licence, visit http://​creativecommons.​org/​licenses/​by/​4.​0/​. 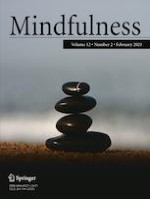 Does Mindful Parenting Mediate the Association between Maternal Anxiety during Pregnancy and Child Behavioral/Emotional Problems?