Mindful parenting has been thought to be more effective and less effortful than following a parenting routine. While there is evidence for effectiveness, the lessened effort is largely based on anecdotes. In this study, we created a self-report Parenting Effort Scale for use with already established parent self-report scales of everyday mindfulness and perceived youth problems. One hundred and eighteen volunteer mothers of middle school adolescents completed the three scales. As expected, mothers’ mindfulness scores covaried inversely with their effort scores and their perceptions of youth problems. Also as expected, the effort scores correlated positively with youth internalizing problem scores. This correlation was significantly weakened when mindfulness scores were entered in a regression model, suggesting that mothers’ mindfulness mediated the connection between their perceived effort and perceived youth internalizing problems. Surprisingly, there was no significant correlation between perceived effort and youth externalizing problems. However, we did find a connection involving effort, mindfulness, and externalizing problems. This connection revealed a moderating function in which mothers with high mindfulness scores reported less effort and lower youth externalizing problems compared to mothers with low mindfulness scores.
vorige artikel Perceived Benefits and Doubts of Participants in a Weekly Meditation Study
volgende artikel Component Processes of Executive Function—Mindfulness, Self-control, and Working Memory—and Their Relationships with Mental and Behavioral Health 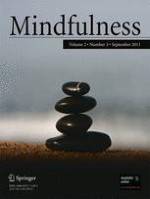 Mindfulness: A Tool for Parents and Children with Asperger's Syndrome

Erratum to: Mechanisms of Mindfulness: A Buddhist Psychological Model