Does Comorbid Anger Exacerbate the Rejection of Children with Depression by their School Peers? | mijn-bsl Skip to main content
ZOEKEN MENU 1 2 3 4

Depression in childhood and adolescence is often accompanied with social rejection by peers, which accentuates the course of that emotion. Despite the documented association between anger and depression, little is known about the impact of the interaction of both emotions on peer relations. The main objective of this study is to explore the interpersonal implications of depression with comorbid anger in a pediatric sample. The sample consisted of 466 participants; the mean age was 11.45 (SD = 1.55). There were 231 females (49.6 %) and 235 males (50.4 %). ANOVAs revealed significant differences between boys and girls in depression, aggression, anger experience/explosive anger and internalized responses to anger. There were no significant differences between the correlations computed with the data from boys and girls for the hypothesized associations among anger, aggression, depression, and peer acceptance/rejection. Both Anger-Out and Depression were significantly associated with perceived unpopularity. Additionally, the interaction of Anger-Out and Depression added significantly to the prediction of perceived unpopularity.
volgende artikel Child-Report of Family Accommodation in Pediatric Anxiety Disorders: Comparison and Integration with Mother-Report 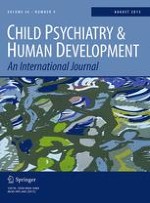 Clinical Profiles of Children with Disruptive Behaviors Based on the Severity of Their Conduct Problems, Callous–Unemotional Traits and Emotional Difficulties

Child-Report of Family Accommodation in Pediatric Anxiety Disorders: Comparison and Integration with Mother-Report