We validated the JBT against established measurements of interpretation bias in a college sample (Study 1) and an adolescent sample (Study 2).

In both samples, a negative judgement bias was significantly associated with a depressive interpretation bias. However, the strength of the associations was only moderate and failed to meet the minimum qualification of convergent validity.

Our results suggest that judgement bias and interpretation bias might be related but distinct. The JBT should not be used as an indirect assessment of interpretation bias in its current form, and it would be premature to claim that animal studies using the JBT could inform our understanding of cognitive biases in mood disorders. Nevertheless, the JBT might be useful for studying specific mechanisms, such as reward processing under ambiguity.
vorige artikel The Associations among Distress Tolerance, Unhelpful Coping Behaviors, and Symptoms of Depression: A Network Analysis
volgende artikel Are Catastrophic Misinterpretations of Bodily Sensations Typical for Patients with Panic Disorder? An Experimental Study of Patients with Panic Disorder or Other Anxiety Disorders and Healthy Controls 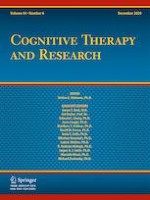 The Associations among Distress Tolerance, Unhelpful Coping Behaviors, and Symptoms of Depression: A Network Analysis

The Impact of Covid-19 Experiences and Associated Stress on Anxiety, Depression, and Functional Impairment in American Adults