To investigate the co-influences of age and morbidity severity on physical health in adult family practice populations.

Increased age and higher morbidity severity were significantly associated with poorer physical health. Of the explained total variance in adjusted PCS scores, an estimated 43% was attributed to increasing age, 40% to morbidity severity and 17% to deprivation for English consulters; the figures were 21, 42 and 31%, respectively for Dutch consulters. The largest differences in PCS scores between severity categories were observed in the younger age groups. 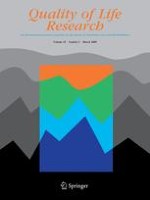 Test–retest reliability of the Food Allergy Quality of Life Questionnaires (FAQLQ) for children, adolescents and adults

The relative contributions of race/ethnicity, socioeconomic status, health, and social relationships to life satisfaction in the United States