Does a Booster Intervention Augment the Preventive Effects of an Abbreviated Version of the Coping Power Program for Aggressive Children? | mijn-bsl Skip to main content
ZOEKEN MENU 1 2 3 4

Booster interventions have been presumed to be important methods for maintaining the effects of evidence-based programs for children with behavioral problems, but there has been remarkably little empirical attention to this assumption. The present study examines the effect of a child-oriented booster preventive intervention with children who had previously received an abbreviated version (24 child sessions, 10 parent sessions) of the Coping Power targeted prevention program. Two hundred and forty-one children (152 boys, 89 girls) were screened as having moderate to high levels of aggressive behavior in 4th grade, then half were randomly assigned to receive the abbreviated Coping Power program in 5th grade, and half of the preventive intervention children were then randomly assigned to a Booster condition in 6th grade. The Booster sessions consisted of brief monthly individual contacts, and were primarily with the children. Five assessments across 4 years were collected from teachers, providing a three-year follow-up for all children who participated in the project. Results indicated that the abbreviated Coping Power program (one-third shorter than the full intervention) had long-term effects in reducing children’s externalizing problem behaviors, proactive and reactive aggression, impulsivity traits and callous-unemotional traits. The Booster intervention did not augment these prevention effects. These findings indicate that a briefer and more readily disseminated form of an evidence-based targeted preventive intervention was effective. The findings have potential implications for policy and guidelines about possible intervention length and booster interventions.
vorige artikel Does Maintenance Treatment Matter?
volgende artikel Evaluation of a Booster Intervention Three Years After Acute Treatment for Early-Onset Disruptive Behavior Disorders 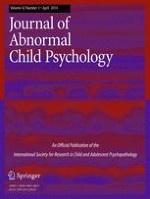 More Than Afterthoughts and Details: Maintenance and Booster Effects as Critical Elements of Intervention Research