This study intended to examine whether correcting for response styles of the widely used self-rated health (SRH) question would affect its predictive validity in estimating respondents’ mortality risks.

We used data on a sample of 3319 men and 3250 women aged 60 and above from a nationally representative survey in China. Response styles were estimated with both ratings on two health anchoring vignettes and self-rated items in domains unrelated to health. Gender-stratified logistic regressions were used to estimate the effects of SRH on 4-year mortality risks. We compared the results before and after adjusting for response styles.

In the unconditional model, the effects of the five-point SRH on 4-year mortality risks were significant in both older women and men, and stronger among Chinese older men based on discrete change in probabilities of mortality at means. Gender difference was observed in response styles. Men assigned lower ratings to the vignettes than women, reflecting their higher standards in defining good health. Women presented higher proportions of extreme responses and lower proportions of midpoint responses. Correcting for response styles had no effect on the predictive validity of SRH for Chinese older men, but had some positive effects for Chinese older women when no other covariates were included.

Adjusting for response styles contributed to a small improvement in predicting mortality risks only among Chinese older women under restricted conditions, but not men.
vorige artikel Development and content validation of a questionnaire measuring patient empowerment in cancer follow-up
volgende artikel Development of a patient-reported experience questionnaire for patients with sarcoma: the Sarcoma Assessment Measure (SAM) 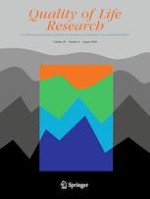 The association between physical activity, sleep, and quality of life in patients in bio-chemical remission from Cushing’s syndrome