NRG Oncology, part of the National Cancer Institute’s National Clinical Trials Network, took efforts to increase patient-reported outcome measures (PROMs) completion and institutional data submission rates within clinical trials. Lack of completion diminishes power to draw conclusions and can be a waste of resources. It is hypothesized that trials with automatic email reminders and past due notifications will have PROM forms submitted more timely with higher patient completion.

Automatic emails sent to the research associate were added to selected NRG Oncology trials. Comparisons between trials with and without automatic emails were analyzed using Chi-square tests with respect to patient completion and timeliness of form submission rates. Multivariable analyses were conducted using repeated measures generalized estimating equations. If PROMs were not completed, a form providing the reason why was submitted and counted towards form submission.

For both disease sites, form submission was significantly higher within 1 month of the form’s due date for the studies with automatic emails vs. those without (prostate: 79.7% vs. 75.7%, p < 0.001; breast: 59.2% vs. 31.3%, p < 0.001). No significant differences in patient completion were observed between the breast trials. The prostate trial with automatic emails had significantly higher patient completion but this result was not confirmed in the multivariable analysis.

Although patient completion rates were higher on trials with automatic emails, there may be confounding factors requiring future study. The automatic emails appeared to have increased the timeliness of form submission, thus supporting their continued use on NRG Oncology trials.
vorige artikel Trajectories of health-related quality of life among people with a physical disability and/or chronic disease during and after rehabilitation: a longitudinal cohort study
volgende artikel Longitudinal analysis of health-related quality of life in cancer clinical trials: methods and interpretation of results 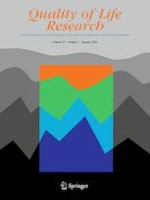 International guidance on the selection of patient-reported outcome measures in clinical trials: a review

The development and validation of the CARe Burn Scale: Child Form: a parent-proxy-reported outcome measure assessing quality of life for children aged 8 years and under living with a burn injury

Longitudinal analysis of health-related quality of life in cancer clinical trials: methods and interpretation of results