This paper examines the upper-limb movement kinematics of young children (3–7 years) with high-functioning autism using a point-to-point movement paradigm. Consistent with prior findings in older children, a difference in movement preparation was found in the autism group (n = 11) relative to typically developing children. In contrast to typically developing children, the presence of a visual distractor in the movement task did not appear to impact on early movement planning or execution in children with autism, suggesting that this group were not considering all available environmental cues to modulate movement. The findings from this study are consistent with the possibility that autism is associated with a difficulty using visual information to prime alternative movements in a responsive way to environmental demands.
vorige artikel Detecting Autism Spectrum Disorders in the General Practitioner’S Practice
volgende artikel How Does Relaxing the Algorithm for Autism Affect DSM-V Prevalence Rates? 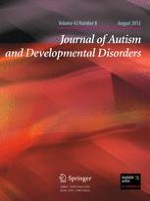 Patterns of Contact with Hospital for Children with an Autism Spectrum Disorder: A Danish Register-Based Study