Do Peers Matter in the Development of Self-Control? Evidence from a Longitudinal Study of Youth | mijn-bsl Skip to main content
ZOEKEN MENU 1 2 3 4

According to Gottfredson and Hirschi’s self-control theory, child and adolescent variation in self-control results primarily from variations in parental socialization. Although much research reveals a link between parenting and self-control, many recent studies indicate that the etiology of self-control is more complex than what has been theoretically specified. In further considering this issue, the current study first presents a theoretical model that emphasizes the role that peers may play in the development of self-control, even when accounting for the influence of parents. Next, we empirically assess the extent to which peer behavior influences self-control during childhood. The data come from a sample of U.S. families (n = 776); 48% of the subjects are male, their age was 9 years, and non-Hispanic whites represented 84% of the sample. The analysis revealed that peer behavior is significantly associated with subsequent self-control, even after accounting for differences in parental socialization, prior self-control, and other potential sources of spuriousness. The implications of the findings for theory and future research are discussed.
vorige artikel Pubertal Timing Fluctuations across Middle School: Implications for Girls’ Psychological Health
volgende artikel Increasing the Complexity of Young Adolescents’ Beliefs About Poverty and Inequality: Results of an 8th Grade Social Studies Curriculum Intervention

Titel
Do Peers Matter in the Development of Self-Control? Evidence from a Longitudinal Study of Youth
Auteurs
Ryan C. Meldrum
Carter Hay 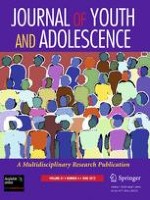