Research demonstrates that callous-unemotional (CU) behaviors, Attention Deficit Hyperactivity Disorder (ADHD) and Oppositional Defiant Problems (ODD) are related, but little is known about the sources of covariation among the three externalizing behaviors. The present study looked at genetic and environmental links between all three behavioral domains in twins at ages 2 and 3 years (MZ = 145, DZ = 169), a time when CU behaviors are beginning to emerge. CU, ADHD, and ODD behaviors as assessed using the Child Behavior Checklist 1.5–5 (Achenbach and Rescorla 2000) were strongly interrelated at both ages. Genetic factors primarily explained the covariation among the three behavioral domains via a common externalizing factor; however, there were also genetic factors unique to each behavior. Furthermore, the majority of nonshared environmental influences on each externalizing behavior were behavior-specific. The heritable externalizing factor was highly stable across age, largely due to genetic factors shared across ages 2 and 3 years. Despite their extensive phenotypic and genetic overlap, CU, ADHD, and ODD behaviors have unique genetic and nonshared environmental influences as early as toddlerhood. This supports phenotypic research showing that the three are related but distinct constructs in very young children. 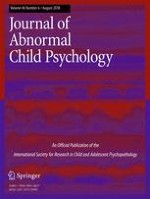 Co-Sleeping among School-Aged Anxious and Non-Anxious Children: Associations with Sleep Variability and Timing

Anxiety and Depression During Childhood and Adolescence: Testing Theoretical Models of Continuity and Discontinuity