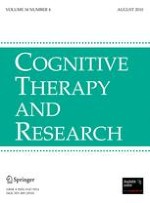 Anxiety Sensitivity in Childhood and Adolescence: Parent Reports and Factors that Influence Associations with Child Reports

Maladaptive Schemas and Psychopathology in Adolescence: On the Utility of Young’s Schema Theory in Youth