Distress intolerance (DI) is a well-established cognitive-affective factor that reflects the inability to tolerate negative emotional experiences. DI has been consistently linked with post-traumatic stress disorder (PTSD) but no research to date has demonstrated whether DI confers pre-existing risk for PTSD-like symptoms following an analogue trauma.

Participants (n = 70) were recruited based on either a history of traumatic brain injury (TBI) or elevations on a related emotional vulnerability. After completing self-report measures, participants watched a film depicting life-threatening car accidents and then monitored the occurrence of intrusions. Ambulatory assessments of film-related traumatic intrusions were then reported 3x/day for 7 days.

These findings provide critical support for DI as a pre-existing risk factor for the development of intrusive thoughts following an analogue trauma. Future research should seek to extend these findings to a clinical sample.
vorige artikel Attentional Control Moderates the Relations between Intolerance of Uncertainty and Generalized Anxiety Disorder and Symptoms
volgende artikel A Randomised Comparison of Values and Goals, Versus Goals Only and Control, for High Nonclinical Paranoia 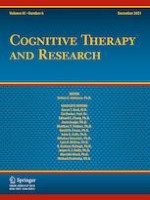 Emotion Dysregulation within the CBT-E Model of Eating Disorders: A Narrative Review

A Randomised Comparison of Values and Goals, Versus Goals Only and Control, for High Nonclinical Paranoia

Towards a Reformulated Theory Underlying Schema Therapy: Position Paper of an International Workgroup