Deficits in social cognition and interaction, such as in mentalizing and imitation behavior, are hallmark features of autism spectrum disorders. Both imitation and mentalizing are at the core of the sense of agency, the awareness that we are the initiators of our own behavior. Little evidence exists regarding the sense of agency in autism. Thus, we compared high-functioning adults with autism to healthy control subjects using an action monitoring and attribution task. Subjects with autism did not show deficits in this task, yet they showed significant mentalizing deficits. Our findings indicate a dissociation between the sense of agency and ascription of mental states in autism. We propose that social-cognitive deficits in autism may arise on a higher level than that of action monitoring and awareness.
volgende artikel Diagnostic Stability in Very Young Children with Autism Spectrum Disorders 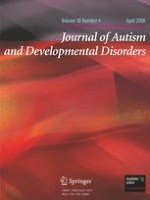 Social Validation of Evidence-Based Practices in Autism by Parents, Teachers, and Administrators

Reliability of the ADI-R: Multiple Examiners Evaluate a Single Case