The recently forwarded family-resemblances framework of mind-wandering argues that mind-wandering is a multidimensional construct consisting of a variety of exemplars. On this view, membership in the mind-wandering family is graded along various dimensions that define more or less prototypical instances of mind-wandering. In recent work, three dimensions that have played a prominent role in defining prototypicality within the mind-wandering family include: (a) task-relatedness (i.e., how related the content of a thought is to an ongoing task), (b) intentionality (i.e., whether thought is deliberately or spontaneously engaged), and (c) thought constraint (i.e., how much attention constrains thought dynamics). One concern, however, is that these dimensions may be redundant with each other. The utility of distinguishing among these different dimensions of mind-wandering rests upon a demonstration that they are dissociable. To shed light on this issue, we indexed the task-relatedness, intentionality, and constraint dimensions of thought during the completion of a laboratory task to evaluate how these dimensions relate to each other. We found that 56% of unconstrained thoughts were “on-task” and that 23% of constrained thoughts were “off-task.” Moreover, we found that rates of off-task thought, but not “freely-moving” (i.e., unconstrained) thought, varied as a function of expected changes in task demands, confirming that task-relatedness and thought constraint are separable dimensions. Participants also reported 21% of intentional off-task thoughts that were freely moving and 9% of unintentional off-task thoughts that were constrained. Finally, off-task thoughts were more likely to be freely-moving than unintentional. Taken together, the results suggest that these three dimensions of mind-wandering are not redundant with one another.
vorige artikel Spatial–numerical associations in the presence of an avatar
volgende artikel The influence of congruency proportion, target eccentricity, and valence strength on the spatial-valence metaphoric congruency effect in a word valence judgment task 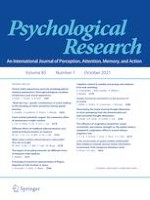 Spatial–numerical associations in the presence of an avatar

Emotion and liking: how director emotional expression and knowledge of (dis)liking may impact adults’ ability to follow the instructions of an ignorant speaker