Previous research has found that cognitive biases in attention, interpretation, and memory play an important role in depression. However, there is little knowledge of the interplay between these biases in clinical depression. The present study was aimed to model different pathways of relation among attention, interpretation and autobiographical memory biases, and to examine their contribution to account for depression status outcomes. Cognitive biases were evaluated in a sample comprising 22 currently-depressed and 36 never-depressed individuals representing a broad range of depression severity levels. Cognitive biases were assessed by three separate tasks using different types of stimuli. Our main finding was a significant indirect effect model in which attention bias to negative faces was linked to greater negative memory bias via its association with negative interpretation bias. Within this model, the specific pathway between attention bias to negative faces and negative interpretation bias accounted both for significant variance in depression severity as well as for depression diagnostic status. These findings increase our understanding of the complex interplay between cognitive mechanisms involved in clinical depression and highlight hypothetical pathways relevant for future interventions.
vorige artikel Systematic Review of In-Session Affect Experience in Cognitive Behavioral Therapy for Depression
volgende artikel Insomnia Symptom Severity Modulates The Impact of Sleep Deprivation on Attentional Biases to Emotional Information 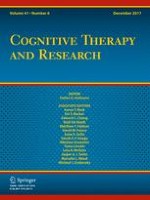 Experiential Avoidance and Bordering Psychological Constructs as Predictors of the Onset, Relapse and Maintenance of Anxiety Disorders: One or Many?