The role of imitation in autism spectrum disorder (ASD) is controversial. Researchers have argued that deficient control of self- and other-related motor representations (self-other distinction) might explain imitation difficulties. In a recent EEG study, we showed that control of imitation relies on high-level as well as on low-level cognitive processes. Here, we aimed to further our insights into control of imitation deficits in ASD. We focused on congruency effects in the P3 (high-level), the N190 and the readiness potential (RP; low-level). We predicted smaller congruency effects within the P3 in the ASD group. However, we found differences in the RP and not in the P3-component. Thus, high-level self-other distinction centred on motor actions may be preserved in ASD, while impairments are reflected during motor preparation.
vorige artikel Emotion Regulation and Parent Co-Regulation in Children with Autism Spectrum Disorder
volgende artikel Predictors of Self-Injurious Behavior and Self-Restraint in Autism Spectrum Disorder: Towards a Hypothesis of Impaired Behavioral Control 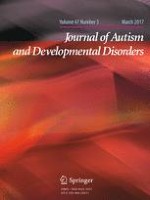 Developmental Markers of Genetic Liability to Autism in Parents: A Longitudinal, Multigenerational Study