Recent studies have suggested that unusual visual processing in autism might stem from enhanced visual discrimination. Although there are also many anecdotal reports of auditory and tactile processing disturbances in autism these have received comparatively little attention. It is possible that the enhanced discrimination ability in vision in autism might extend to other modalities and further that they may underlie many reports of unusual touch and audition. The present study investigated the performance of children with and without autism on auditory and tactile discrimination tasks and revealed superior auditory but comparable tactile discrimination in autism relative to controls. These results extend previous findings of perceptual discrimination in autism and may be relevant for a neuro-developmental hypothesis of the disorder.
vorige artikel The Collateral Effects of Joint Attention Training on Social Initiations, Positive Affect, Imitation, and Spontaneous Speech for Young Children with Autism
volgende artikel Superior Disembedding Performance of High-Functioning Individuals with Autism Spectrum Disorders and Their Parents: The Need for Subtle Measures 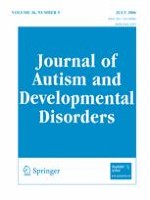 Introducing MASC: A Movie for the Assessment of Social Cognition