Self-perception in high-functioning children and adolescents with Autism Spectrum Disorder (ASD) was examined by comparing parent- and self-reports on the Autism Spectrum, Empathy, and Systemizing Quotients (AQ, EQ and SQ). Participants were 20 youths with ASD and 22 typically developing controls. Both parents and participants in the ASD group reported more autistic traits (higher AQ) and less empathy (lower EQ) than the control group. SQ ratings did not differ between groups. Comparisons of self- and parent-reports indicated that youths with ASD reported significantly fewer autistic traits and more empathic features than their parents attributed to them. There were no discrepancies between parent- and self-reports in the control group. Implications regarding the use of self-report in ASD are discussed.
vorige artikel Fundamental Movement Skills in Children Diagnosed with Autism Spectrum Disorders and Attention Deficit Hyperactivity Disorder
volgende artikel Sex Differences in Autism Spectrum Disorder: An Examination of Developmental Functioning, Autistic Symptoms, and Coexisting Behavior Problems in Toddlers

Titel
Discrepancies Between Self- and Parent-Perceptions of Autistic Traits and Empathy in High Functioning Children and Adolescents on the Autism Spectrum
Auteurs
Shannon A. Johnson
Jillian H. Filliter
Robin R. Murphy 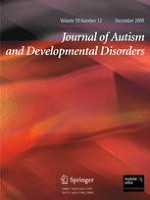 Beyond Behaviour: Is Social Anxiety Low in Williams Syndrome?

L. K. Koegel and C. LaZebnik: Growing up on the Spectrum: A Guide to Life, Love, and Learning for Teens and Young Adults with Autism and Asperger’s