Parent-Child Interaction Therapy (PCIT) is an effective therapy to treat early onset disruptive behavior problems and child physical maltreatment. In order to support the successful implementation and sustainment of PCIT, strategies are needed to recruit parents into care, especially for racial and ethnic minority families, who often have lower rates of access and utilization of mental health services.

This study investigated the impact of direct-to-consumer advertisements on parents’ attitudes towards PCIT. Advertisements were delivered in Spanish and English, with either a parent testimony or therapist explaining the treatment. Participants were parents of children between the ages of 2 and 7, who were recruited through Amazon Mechanical Turk. Participants (N= 204) were 38.2% female and 49.5% Spanish speaking.

There were no main effects for language or messenger related to PCIT Help-Seeking Intentions, Attitudes, or Stigmatization. However, there was an interaction effect for language and messenger for PCIT Help-Seeking Intentions. Specifically, Spanish-speaking participants had higher intentions when the messenger was a therapist rather than a parent, and had lower intentions than English-speaking parents when the messenger was a parent.

These findings are promising for direct-to-consumer advertising strategies that may help recruit more Spanish-speaking families into PCIT, which could help address disparities in access to mental health services.
vorige artikel Caregiver Depressive Symptoms Associated with Behavioral and Emotional Problems in Preschoolers
volgende artikel The Feasibility and Effectiveness of Mindful Yoga for Preschoolers Exposed to High Levels of Trauma 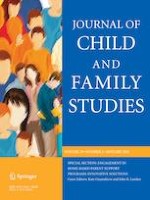 Coming Out in Family and Sports-related Contexts among Young Italian Gay and Lesbian Athletes: The Mediation Effect of the “Don’t Ask, Don’t Tell” Attitude

Understanding the Externalizing Behavior of School-Age Boys: The Role of a Mother’s Mentalization and Attachment

Does Adolescent Anxiety Moderate the Relationship between Adolescent–Parent Communication and Adolescent Coping?

The Role of Theory of Mind, Emotion Knowledge and Empathy in Preschoolers’ Disruptive Behavior