There are distinct dimensions of Oppositional Defiant Disorder (ODD) that have been associated with symptoms of other disorders (heterotypic continuity). The present study compared the heterotypic continuity of a two-factor (Pitt-2) model and the three-factor model incorporated into DSM-5 with symptoms of anxiety and depression. Participants were a diverse community sample of 796 children (38.8 % minority, 49.1 % boys) assessed at ages 4, 5 and 6 years. Symptoms were assessed with the dimensional scales of the Diagnostic Interview Schedule for Children-Young Child version and the Child Symptom Inventory. Dimensions of both the two- and three-factor DSM-5 models were associated with later symptoms of anxiety and depression. The association, however, was weak when accounting for initial levels of internalizing symptoms: thus there was little evidence for the unique contributions of ODD dimensions to symptoms of subsequent internalizing disorders for either model.
vorige artikel Relations Between PTSD and Distress Dimensions in an Indian Child/Adolescent Sample Following the 2008 Mumbai Terrorist Attacks
volgende artikel Executive Functioning and Non-Verbal Intelligence as Predictors of Bullying in Early Elementary School 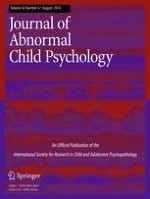 Family Poverty and Trajectories of Children’s Emotional and Behavioural Problems: The Moderating Roles of Self-Regulation and Verbal Cognitive Ability

Multilevel and Cross-Level Effects of Neighborhood and Family Influences on Children’s Behavioral Outcomes in Trinidad and Tobago: The Intervening Role of Parental Control

Longitudinal Analysis of Adolescent NSSI: The Role of Intrapersonal and Interpersonal Factors