The dramatic increase in diagnostic rates of bipolar disorder in children and adolescents in the USA has led to an intense interest in the phenomenology of the disorder. Here we present data from a newly-developed instrument to assess episodic mania-like symptoms in youth in a large population-based sample (N = 5326) using parent- and self-report. We found that a substantial proportion of children screened positive for having episodes of “going high” and were at an increased risk for morbidity and impairment. Using factor analysis, we identified that episodic mania-like symptoms comprised two dimensions: An under-controlled dimension that was associated with significant impairment, and a low-risk exuberant dimension. Using latent class analysis, we identified a small group of children scoring high on a range of manic symptoms and suffering from severe psychosocial impairment and morbidity. Our results carry implications for the nosology and psychosocial impairment associated with episodic mood changes in young people.
Extras
Esm 1 (DOC 38.5 KB)
Opmerkingen

The field work for the 2004 British Child and Adolescent Mental Health Survey (B-CAMHS04) was conducted in 2004. The sample was a representative group of 5–16 year olds (N = 7977). The design of this survey has been previously described in detail (Green et al. 2005). Briefly, the study used “Child benefit” to generate a sampling frame. This refers to a universal state benefit payable in Great Britain for each child in a family. This was used to develop a sampling frame of 5–16 year olds in the different postal sectors in England, Wales, and Scotland; after excluding families with no recorded postal code, it was estimated that this represented 90% of all British children. Out of the 12,294 recruited, there were 1,085 who opted out and 713 who were non eligible or had moved without trace, leaving 10,496 who were approached. Of those, 7,977 participated (65% of those selected; 76% of those approached). Three years after the original field work (i.e., in 2007 (Parry-Langdon 2008)), families were approached once more unless they had previously opted out or the child was known to have died. Of the original 7,977 participants, 5,326 (67%) participated in the detailed follow-up (Parry-Langdon 2008).

The Strengths and Difficulties Questionnaire (SDQ) is a 25-item scale that has been shown to possess robust psychometric properties (Bourdon et al. 2005; Goodman 1997, 2001). It was administered to parents and youth and generated an SDQ total symptoms score (reflecting hyperactivity, inattention, behaviour problems, emotional symptoms and peer problems). There are no symptoms of elated or expansive mood in the SDQ symptom items.
The SDQ total impact score, a measure of overall distress and social impairment due to all mental health problems (Goodman and Scott 1999), was also used. It specifically includes impairment in the domains of family, school, learning and leisure. Hereafter, we refer to this score as “social impairment”.
The Development and Well-Being Assessment (DAWBA) was used in the survey (Ford et al. 2003; Goodman et al. 2000). It is a structured interview administered by lay interviewers with questions that are closely related to the diagnostic criteria of the DSM-IV (American Psychiatric 2000). It focuses on current rather than life-time problems. The κ-statistic for chance-corrected agreement between two raters was 0.86 for any disorder (SE 0.04), 0.57 for internalizing disorders (SE 0.11), and 0.98 for externalizing disorders (SE 0.02) (Ford et al. 2003). Children were given a diagnosis only if the symptoms reported were causing significant distress or social impairment. The DAWBA interview was administered to all parents and to all youth aged 11 or more, while teachers were administered an abbreviated questionnaire. In this, as in previous studies using the DAWBA, DSM-IV diagnoses are assigned by integrating information from the parent, youth and teacher reports on symptoms and impairment (Ford et al. 2003). Further information on the DAWBA is available from http://​www.​dawba.​info, including on-line and downloadable versions of the measures and demonstrations of the clinical rating process. For the purposes of the analyses in this paper, diagnoses of anxiety and depression were treated as part of an over-riding category of “emotional problems”.
As described previously (Stringaris et al. 2010b), the 2007 survey incorporated questions on elated mood and symptoms of mania for parents and youth (but not teachers). The complete bipolar section of the interview can be seen at http://​www.​dawba.​info/​Bipolar/​ . Throughout this paper, the findings for parent-report and youth report on episodes of elated mood and mania like symptoms are presented separately. In summary, the parents of 8–19 year olds and the 11–19 year olds themselves were presented with the following preamble: “Some young people have episodes of going abnormally high. During these episodes they can be unusually cheerful, full of energy, speeded up, talking fast, doing a lot, joking around, and needing less sleep. These episodes stand out because the young person is different from their normal self.” They were then asked: “Do you [Does X] ever go abnormally high?”, to which they had the options of answering: No, A little, A lot. For this screening question, those answering “A little” had significantly more comorbitidy and social impairment than those answering “No”. In the interest of having as broad as possible a representation of subjects, we chose to include as “screen positive” those who answered “A little” as well as those who answered “A lot”—enquiring whether 26 specific symptoms of mania (including those stipulated by DSM-IV(APA 2000)) occurred during such episodes of going high. For each individual symptom, the participants had the option of choosing between one of the following answers: No, A little, A lot. Given that the answers No and A little did not differ with respect to their prediction of overall impairment, we dichotomised each item by merging No and A little. Re-running analyses using the trichotomous item coding did not alter the key findings of this paper.

Latent Classes of Individuals Based on Mania-Like Symptom Profiles

For both parent and self report, a 3-class solution of the LCA models was chosen on the basis of fit indices (see supplementary Tables 1 and 2) and parsimony. The results of the two LCA models are presented in Fig. 1a and b for parent and self reported-items respectively. For ease of interpretation, the horizontal axis lists mania-like symptoms according to their relative loading on the two previously identified factors, i.e., based on each item’s loading on episodic under-control minus its loading on episodic exuberance. Thus the items on the left are primarily exuberant and those on the right primarily under-controlled, with a gradient in between. On the vertical-axis, we plotted for each of the identified latent classes the adjusted probability of scoring “A lot” on each listed item to take account of the fact some items were more common than others. We did this by expressing the probabilities of each item as ratios to the average probability for that item in the sample as a whole.
×
As shown in Fig. 1a and b, reflecting both reporting sources, a small class of people emerged with high probability of scoring “A lot” on all items across the episodic under-control and exuberance sub-scales; we termed this class “top”. A larger class of subjects scoring low on all items emerged by both reporting sources—we designated this group “low”. The largest class, which we designated “intermediate” was made up of individuals with probability ratios that lay between the top and bottom classes. By parent report, 1.7% of the total sample of 8–19 year-olds were in the top latent class. The corresponding figure for self report was 2.5%.
The agreement between parent and self reported classes was low but significant (κ = 0.19, p < 0.0001). By parent report, the ANOVA for age was significant overall (F = 4.5, df = 2; p < 0.05); children in the “low” class (13.6 years, sd = 3.3) were older compared to those in the “top” (12.6 years, sd = 2.8, Tukey HSD = 3.9)) but not those in the intermediate (12.9 years, sd = 3.1, Tukey HSD = 1.1) classes, and the intermediate and low classes did not differ significantly from each other (Tukey HSD = 2.76). By self report, there were no significant age differences (overall ANOVA: F = 1.2, df = 2; p > 0.05) between classes (top (14.6 years, sd = 2.3), intermediate (14.9 years, sd = 2.3) and low (14.8 years, sd = 2.3)).
By parent report, the top class contained significantly more boys (72%) compared to the intermediate (48%; χ 2 = 15.2, df = 1, p < 0.001) and low class (50%; χ 2 = 13.0, df = 1, p < 0.001), but the difference between the intermediate and low classes was not significant (χ 2 = 0.1, df = 1, p = 0.74). By self report, there were no significant differences in the proportion of boys between the top (40%), intermediate (47%) and low (43%) classes (all χ 2 < 2, p > 0.05).

External Validation of the Latent Classes

This work has been partly funded by a Wellcome Trust Intermediate Fellowship to Dr Stringaris. 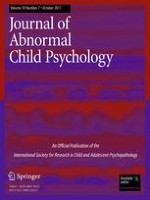