The Social Responsiveness Scale (SRS) is a well-established measure of autism spectrum disorder (ASD), yet it is known to suffer reduced specificity in samples of children with comorbid emotional or behavioural problems. This research examined the specificity of the SRS in children with mixed presentations of internalising and externalising psychopathology and ASD. Participants were 522 (397 male) children aged between 4 and 16 years. The associations between SRS total scores and diagnoses were determined using partial correlations and analyses of variance. A subsample of participants with a single diagnosis was used to identify a subset of questions that distinguished between ASD and all other diagnoses. These items were used to create the 16-item SRS-brief. The SRS was found to have good reliability and sensitivity but poor specificity. The SRS-brief had good psychometric properties and was found to be a more accurate tool for the screening of ASD than the original SRS.
vorige artikel Parent–Child Conflict and Early Childhood Adjustment in Two-Parent Low-Income Families: Parallel Developmental Processes
volgende artikel The Association Between Parenting Stress, Parenting Self-Efficacy, and the Clinical Significance of Child ADHD Symptom Change Following Behavior Therapy 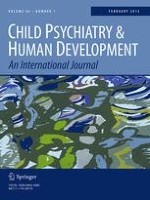