Data from a sample of 4524 children in the ABCD study were used [34‐36]. Due to missing values on some measures, the sample size for the current analysis was 4139 children. Participants were excluded from analysis if they or their parent/guardian did not complete a questionnaire, or if they answered, “do not know” for questions. The included participants were 8.9–11 years of age (mean = 10 years, SD = 0.61), and were close to evenly distributed between sexes (1977 girls and 2162 boys). 15.2% of children were Black American, and 8.2% were of other minority ethnic backgrounds. Written and verbal consent were collected from all parents/guardians, and written and verbal assent from all children were collected as well. The data used were obtained through the National Database for Autism Research through the National Institute of Mental Health Data Archive.

The ABCD Screen Time Survey (STQ) was completed by the children, and a different, shorter STQ was completed by the child’s parent/guardian [37]. The STQ for children is a 14-item questionnaire that asks how many hours per day a child uses different forms of electronic media. The responses range from “0 h” (0) to “4 + h” (4) and the questionnaire asks about 6 forms of media on weekdays and on weekends. These media include: television shows and movies, videos, video games, texting, social networking, and video chatting. The last two questions of the youth STQ pertain to the frequency of mature video game consumption and R-rated movie consumption. These two questions were not used in analyses. Total weekday and weekend minutes for screen time based on child reports were calculated by adding the total hours reported for weekday use or weekend use, and then multiplying by 60. The STQ for parents is a 2-item questionnaire that asks about the child’s total media use on weekdays and on weekends, as a continuous variable in minutes. The ABCD Screen Time Questionnaires were based on measures developed by Sharif et al. [38]. For parent reports of EMU, EMU is defined based on devices, specifically on a “computer, cellphone, tablet, or other electronic device” (Jernigan et al. [35, 36].

Parents/guardians completed the Child Behavior Checklist (CBCL), a 112-item questionnaire that asks about various symptoms and behaviors the adolescent may exhibit [37, 39]. The CBCL contains 9 statements used to form an anxiety subscale of the CBCL. The subscale includes statements such as “worries” and “self-conscious or easily embarrassed.” Responses were scaled from 0 (not true) to 2 (very true/often true). T-scores were calculated and used for analysis. A T-score of 65 was considered to be in the clinical range for anxiety.

The CBCL was also used to measure depression symptoms in children [37, 39]. A subscale containing 13 statements, such as “There is very little he/she enjoys” and “Underactive, slow moving, or lacks energy,” each scaled from 0 to 2. T-scores were calculated and used for analysis. A T-score of 65 was considered to be in the clinical range for depression.

EMU could be related to child anxiety or depression because it is a proxy for reduced physical activity, which has also been linked to mental health [3, 4]. To control for this, we utilized a measure of child reported physical activity. Children were asked “During the past 7 days, on how many days were you physically active for a total of at least 60 min per day? (Add up all the time you spent in any kind of physical activity that increased your heart rate and made you breathe hard some of the time).” The wording of the question aimed to make clear that participants could include both organized activities (such as gym class or an extracurricular sport), and individual activities. The wording also permitted participants to consider that the 60 min did not have to occur all at once. Answers could range from 0 to 7.

Similar to physical activity, EMU could be related to child anxiety or depression because it is a proxy for increased BMI, which has also been linked to mental health [40, 41]. Height was measured up to three times, and the average of the two closest heights was taken (or of all three if one of the values was equidistant from the other two). The same was done to measure weight. BMI was then calculated using the average height and average weight of each adolescent.

Comparison of Mean Levels and Associations

Table 1 provides the means, standard deviations, and range of values for variables used in the analyses reported below. First, we examined the interrelationships between the two child report EMU measures and the two parent report EMU measures, using the general linear models described in the methods that controlled for age, sex, BMI, family income, race, and physical activity. The two child report measures of EMU (β =0.71, t = 67.68, p <0.001) and the two parent report measures (β =0.48, t = 34.74, p <0.001) were highly correlated. The child and parent report measures of both weekday (β =.18, t = 12.26, p <0.001) and weekend (β =0.16, t = 12.06, p <0.001) EMU were also correlated. Next, we compared the magnitude of use reported by parents versus children, using a repeated measures ANOVA with day (weekday versus weekend) and source (parent versus child) as within-subject factors. There were main effects of day (F (1,4500) = 2579.58, p =< 0.001) and source (F (1,4500) = 255.92, p < 0.001), and an interaction between day and source (F (1,4500) = 91.56, p < 0.001). As can be seen from the values in Table 1, children reported overall more EMU than parents, and both children and parents reported more EMU on the weekends than the weekdays. However, the interaction reflected that the degree to which children reported greater EMU than parents was larger on weekdays versus weekends.
Table 1
Sample characteristics

Relationships of Overall EMU to Anxiety and Depression

All generalized linear mixed models used age, sex, BMI, family income, race, and physical activity as covariates, and accounted for testing site and family nesting of individuals. We initially examined the relationships of child anxiety and child depression to overall EMU, as shown in Table 2. Child report of weekday EMU and both child and parent report of weekend EMU were significantly associated with anxiety symptoms. For depression, both child and parent report of both weekday and weekend EMU were significantly associated with depression. We next asked whether either child or parent reported EMU continued to be associated with anxiety after controlling for depression. No EMU measure showed a significant relationship with anxiety symptoms when controlling for depression. All reports of EMU remained significantly related to depression when controlling for anxiety, other than child report of weekday EMU. Of note, while many of the associations were significant, the effect sizes were relatively small.
Table 2
Relationships between anxiety or depression and electronic media use

Depression and Anxiety as a Function of EMU

Relationships of Specific Types of EMU to Anxiety and Depression

This study contributes to the growing body of research on electronic media use, anxiety symptoms, and depression symptoms in children. Our results suggest that in the pre-teen years, there is a stronger association between EMU and depression, than between EMU and anxiety, with evidence for gender differences in the relationship between EMU use and anxiety. Further, we find that certain types of EMU are more strongly related to mental health in children, though this may change as the children move into adolescence. The longitudinal analyses that will be supported by the additional future waves of assessment as part of the ABCD study will allow for further investigation of causal relationships and changing relationships between EMU and mental health that may emerge across the course of development.

We thank the families participating in this study and the staff who helped make the project a success. The ABCD data repository grows and changes over time. The ABCD data used in this report came from https://​doi.​org/​10.​15154/​1412097.

All procedures performed in studies involving human participants were in accordance with the ethical standards of the institutional and/or national research committee and with the 1964 Helsinki declaration and its later amendments or comparable ethical standards.
Open AccessThis article is distributed under the terms of the Creative Commons Attribution 4.0 International License (http://​creativecommons.​org/​licenses/​by/​4.​0/​), which permits unrestricted use, distribution, and reproduction in any medium, provided you give appropriate credit to the original author(s) and the source, provide a link to the Creative Commons license, and indicate if changes were made. 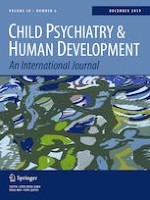 Does Family Accommodation Predict Outcome of Concentrated Exposure and Response Prevention for Adolescents?

Multi-informant Expectancies and Treatment Outcomes for Anxiety in Youth