To assess the observed prevalence per year of takotsubo cardiomyopathy in a large registry of patients with STEMI, during a 12-year inclusion period.

All patients presenting with STEMI at a large regional cardiology clinic were entered into a database (n = 8,413, mean age 63 ± 13 years). Takotsubo cardiomyopathy was diagnosed in 42 patients (0.5 %). Years of evaluation were defined as ‘early years’ (January 2002 to December 2007; n = 4350) and ‘later years’ (January 2008 to December 2013). Multivariable analyses were performed to adjust for differences in demographical and clinical variables.

Takotsubo cardiomyopathy is currently more often diagnosed in patients with STEMI compared with in earlier years. This is probably due to the increased scientific and clinical awareness among doctors, but the prevalence is still low.

From January 2002 to December 2013, individual data from all STEMI patients who were considered for primary PCI and who underwent early coronary angiography at our centre, were prospectively recorded in a dedicated database. Early years were defined as January 2002 until December 2007 and later years as January 2008 until December 2013. Patients were diagnosed with STEMI if they had chest pain lasting longer than 30 minutes and ECG changes with ST elevation >2 mm in at least two precordial leads or >1 mm in the limb leads. Cardiac biomarkers were elevated in all patients. Information on demographic variables was directly registered at first contact with the patient, including age, sex, medical history, family history and traditional cardiovascular risk factors. In patients in whom echocardiography was performed during admission or after one month to assess LV function, the echocardiogram was reviewed by an expert cardiologist or a resident in cardiology supervised by an expert. In order to investigate the number of publications concerning takotsubo cardiomyopathy, we sought in the PubMed database with the following search strategy per year: (“2002/01/01” [Date-Publication] : “2002/12/31” [Date-Publication]) AND ((tako AND tsubo) OR takotsubo). Although takotsubo cardiomyopathy is sometimes mentioned as ‘ampulla cardiomyopathy’, ‘apical ballooning syndrome’, ‘broken heart’ or ‘stress-induced cardiomyopathy’ in the literature, almost all articles were still revealed with the search strategy because takotsubo or tako tsubo was mentioned in the article [11‐13].

Statistical analysis was performed using SPSS version 20 (SPSS Inc, Chicago, IL). Continuous data were expressed as mean and standard deviation and categorical data as percentages. Tests for significance were two-sided and values with an α of 0.05 were considered significant. In order to analyse whether an independent association was present for the number of patients observed with takotsubo cardiomyopathy over time and the number of publications, we used binary logistic regression comparing early years with later years. The multivariate model consisted of all baseline variables with a p ≤ 0.1 (gender, age, previous PCI, hypertension, smoking, hypercholesterolaemia, positive family history and Killip class ≥2).

Trends over the years in patients referred for STEMI

Difference in patients with and without takotsubo

Trends in prevalence of takotsubo cardiomyopathy over the years

This study was performed retrospectively in the first years and not all patients received sequential imaging of LV function. Therefore, it is likely that especially patients with takotsubo cardiomyopathy were underdiagnosed.

A.M. Otten, J.P. Ottervanger, T. Symersky, H. Suryapranata, M.J. de Boer and A.H.E.M. Maas state that there are no conflicts of interest.
Open Access This article is distributed under the terms of the Creative Commons Attribution 4.0 International License (http://creativecommons.org/licenses/by/4.0/), which permits unrestricted use, distribution, and reproduction in any medium, provided you give appropriate credit to the original author(s) and the source, provide a link to the Creative Commons license, and indicate if changes were made.
vorige artikel Takotsubo cardiomyopathy: serious early complications and two-year mortality – a 101 case study
volgende artikel Psychological distress and personality factors in takotsubo cardiomyopathy
insite
INHOUD
share
DELEN 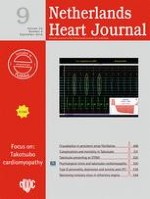 Safety and efficacy of a device to narrow the coronary sinus for the treatment of refractory angina: A single-centre real-world experience

The association between type D personality, and depression and anxiety ten years after PCI