Although genetic and environmental factors are separately implicated in the development of antisocial behavior (ASB), interactive models have emerged relatively recently, particularly those incorporating molecular genetic data. Using a large sample of male Caucasian adolescents and young adults from the National Longitudinal Study of Adolescent Health (Add Health), the association of deviant peer affiliation, the 30-base pair variable number tandem repeat polymorphism in promoter region of the monoamine oxidase-A (MAOA) gene, and their interaction, with antisocial behavior (ASB) was investigated. Weighted analyses accounting for over-sampling and clustering within schools as well as controlling for age and wave suggested that deviant peer affiliation and MAOA genotype were each significantly associated with levels of overt ASB across a 6-year period. Only deviant peer affiliation was significantly related to covert ASB, however. Additionally, there was evidence suggestive of a gene-environment interaction (G × E) where the influence of deviant peer affiliation on overt ASB was significantly stronger among individuals with the high-activity MAOA genotype than the low-activity genotype. MAOA was not significantly associated with deviant peer affiliation, thus strengthening the inference of G × E rather than gene-environment correlation (rGE). Different forms of gene-environment interplay and implications for future research on ASB are discussed. 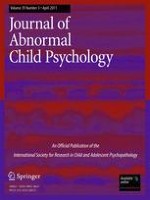 Mothers and Children as Informants of Bullying Victimization: Results from an Epidemiological Cohort of Children