Recent cognitive models of negative symptoms in psychosis posit that amotivation relevant beliefs are reflected in the cognitive triad of negative beliefs concerning the self, others and the future. The aim of this study was to test the proposed three-factor structure of putative ‘demotivating beliefs’ and to ascertain the strength of their association with self-reported amotivation. We combined existing scales assessing ‘demotivating beliefs’ to the Demotivating Beliefs Inventory. This scale was used for exploratory and confirmatory factor analyses as well as latent regression analyses with amotivation in two independent community (n1 = 98; n2 = 347) and one clinical sample (n = 36). We found a three-factor structure with satisfying model fit (‘selfdefeating beliefs’, ‘social indifference beliefs’ and ‘low-expectancy-of-pleasure beliefs’). Each factor showed moderate associations with amotivation (β-coefficients from 0.34 to 0.43; R2 = .30). Our results support the validity of the cognitive triad and its benefit as a framework to analyze demotivating beliefs. 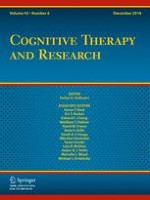 Correction to: Social Anxiety Disorder as a Densely Interconnected Network of Fear and Avoidance for Social Situations

Is Integrated CBT Effective in Reducing PTSD Symptoms and Substance Use in Iraq and Afghanistan Veterans? Results from a Randomized Clinical Trial