» Toegang tot de volledige tekst krijgen
Belangrijke opmerkingen
These results were presented in part at the International Meeting for Autism Research in Philadelphia, PA, May 2010.

This study piloted a role play assessment of conversational skills for adolescents and young adults with high-functioning autism/Asperger syndrome (HFA/AS). Participants completed two semi-structured role plays, in which social context was manipulated by changing the confederate’s level of interest in the conversation. Participants’ social behavior was rated via a behavioral coding system, and performance was compared across contexts and groups. An interaction effect was found for several items, whereby control participants showed significant change across context, while participants with HFA/AS showed little or no change. Total change across contexts was significantly correlated with related social constructs and significantly predicted ASD. The findings are discussed in terms of the potential utility of the CASS in the evaluation of social skill. 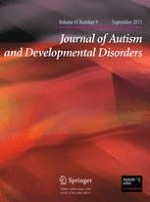 Examining Autistic Traits in Children with ADHD: Does the Autism Spectrum Extend to ADHD?

Adaptation to Daily Stress Among Mothers of Children With an Autism Spectrum Disorder: The Role of Daily Positive Affect

Attention to Faces in Williams Syndrome

Thinking in Pictures as a Cognitive Account of Autism