This study aimed to develop and evaluate different families of applicable models available for utility mapping between World Health Organization Quality of Life for HIV-abbreviated version (WHOQOL-HIV Bref) and EQ-5D-3L and to propose an optimised algorithm to estimate health utilities of people living with HIV.

Estimation dataset was collected between July 2014 and September 2016 in a cross-sectional study including 1526 people living with HIV/Aids (PLWH) under care at the Instituto Nacional de Infectologia Evandro Chagas—FIOCRUZ, in Brazil. Data of WHOQOL-HIV Bref and EQ-5D-3L questionnaires were collected. Fisher’s exact tests were used for testing WHOQOL-HIV Bref response frequencies among groups of responses to each of the five EQ-5D-3L domains. Multiple correspondence analyses (MCA) were used to inspect the relationships between both instrument responses. Different families of applicable models available for utility mapping between WHOQOL-HIV Bref and EQ-5D-3L were adjusted for the prediction of disutility.

Candidate models’ performances using mean absolute error (MAE), mean squared error (MSE), and root mean squared error (RMSE) were similarly good, which was evidenced by the overlapping of its 95% confidence intervals of the mean tenfold cross-validation or estimated generalisation errors. However, the Hurdle Logistic-Log-Normal model was better on average according to generalisation errors both in the prediction of Brazilian utility values (MAE = 0.1037, MSE = 0.0178, and RMSE = 0.1332) and for those of the UK (MAE = 0.1476, MSE = 0.0443, and RMSE = 0.2099). 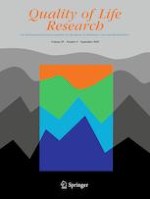 The association of socio-economic status, dental anxiety, and behavioral and clinical variables with adolescents’ oral health-related quality of life